Terminator 3: Rise of the Machines review 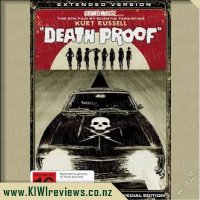 Stuntman Mike (Kurt Russell) is a professional body double who likes to take unsuspecting women for deadly drives in his free time. He has doctored his car for maximum impact; when Mike purposely causes wrecks, the bodies pile up while he walks away with barely a scratch. The insane Mike may be in over his head, though, when he targets a tough group of female friends, including real-life stuntwoman Zoe Bell (who served as Uma Thurman's double in "Kill Bill"), who plays herself. Part of a double feature (the other half being "Planet Terror"), this film is definitely a Quentin Tarantino directed film. The film has very little plot beyond a psychopathic character that enjoys to kill women, until they start to fight back.

This is an odd film, that really has no clear point to it; all conversations and exposition lead to nowhere. The film looks like it has been intentionally damaged to give it the look of an old film that has done a few miles around the theatres. It truly is an oddball collection of techniques and scenes,

But what it does have is women, fighting for their lives in American Muscle Cars, in an 18 minute long car chase, that leads to the destruction of both cars. It is great to see a proper car chase without the need for slick and clean computer generated effects, this is a proper stunt, performed by actual stunt people acting as stunt people (you can even see the dust kicked up from the cameraman's car often during the race).

I was surprised to find that the "lead" female character was actually a New Zealand stunt woman, playing herself. So I love this film for proudly representing our nation, and actually getting credit for doing so. My flatmate is in love with the lead female character, and has watched this film 5 times in one day, I am however, more skeptical. While I enjoyed the final car chase, the first 110 minutes is really unnecessary

Set three years after "Ocean's 11," this sequel shows us Danny Ocean gathering up his complete gang of con artists and thieves from the first film in New York City before they all jet off to Amsterdam, Rome, and Paris to pull off three seperate heists.

All the while, the boys must deal with increasing pressure from a very mad Terry Benedict wanting his money back with interest, a dedicated Europol agent with a link to Rusty's past, ... more...