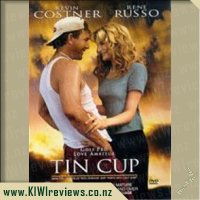 I really don't know what I expected of this one. For a golfing love story that came out several months after the hugely successful "Happy Gilmore" movie, I really expected more of this film. When I saw that it had Cheech Marin as one of the mentioned stars in the opening credits, it certainly looked like it would be another comedy, but it quickly devolved into a drama, and not a very good one at that.

This film has all the same aspects as "Happy Gilmore"; Jerk golfer, odd caddy, great talent marred by one problem that needs to be overcome, a need for money etc. etc., but it failed to provide either comedic value with its choice in cast, neither did they come across as convincing. It came across as over-the-top, but not far enough to truly be a drama, or a comedy. And in that respect, it failed to entertain me.

I sat through this whole movie with two flatmates, who desperately wanted to be the first to figure out this films redeeming feature, but one gave up and did housework, while the second one still has no idea what was good about this film. I did not understand why they continued to use betting and challenges as plot points, as it did nothing for the film, and nothing ever eventuated because of it.

I would not recommend this film, neither would I watch it again. It didn't make me laugh, neither did it make me think. So I'm leaving this one on the shelf.