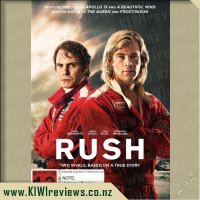 In the mid-1970s, charismatic English playboy James Hunt (Chris Hemsworth) and Austrian perfectionist Niki Lauda (Daniel Brühl) share an intense rivalry in Formula 1 racing. Driving vehicles that are little more than gas-filled, rolling bombs, Hunt and Lauda burn up the track, all the while pushing themselves to the breaking point of physical and mental endurance. Meanwhile, the women (Olivia Wilde, Alexandra Maria Lara) in their lives can only watch as both drivers risk death with every lap. I have never been a huge sports fan, but I do love a good movie, so I thought I'd give "Rush" a try. The first scene has two rivals eyeballing each other from the track, and suddenly you're thrown back 6 years and working your way back. In my opinion, that part wasn't really necessary. The narrative alone did the job of letting me know what was going on, instead you feel that the movie is going to be a bunch of flashbacks until the present.

The only reason that I bring it up is to say to ignore it, and don't let it dissuade you from watching it enthusiastically. Observing two competitors competing so strongly that one's actions directly influences the other, is a treat. Watching them move up from Formula 3, to Formula 1, taking in their setbacks and triumphs, it is fun to watch this historical rivalry.

Lucky for me, I knew nothing about Formula 1 racing, so it was educational as well as entertaining, and I did not know how it would turn out. There was certainly enough action to keep one occupied. It had my flatmate so intrigued that he spent much time during and after the movie providing additional facts, alerting us at the end that he wished he "could be a 70's Formula 1 driver".

While Chris Hemsworth was not the greatest actor, Daniel Brühl was able to hold this film together, maintain the feeling of authenticity.