Heartside Bay #7 - Back To You review 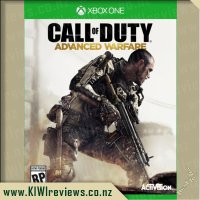 Set in 2054, Advanced Warfare tells the story of Private Jack Mitchell, who during a conflict against the North Koreans in Seoul, he loses his left arm and is discharged from the military. Approached by Jonathan Irons to join the Atlas Corporation, the worlds largest and most powerful Private Military Company. Call Of Duty: Advanced Warfare is the latest addition to the COD franchise brought to us by Sledgehammer Games. Multi Award winning actor Kevin Spacey portrays Jonathan Irons, the world's most powerful man and sector leader in PMC's "guns for hire". Set in the not too distant future, with the next gen weaponry and Exo Suit technology, Advanced Warfare paints a picture of how large and medium scale warfare is waged in the next generation. With more and more nations outsourcing their military needs to these Private Military Corporations, Jonathan Irons has founded and owns the world's largest, called Atlas Corporation.

At the centre of Atlas Corporation's technology is the Exo Suit, which enables the soldier to customise how he will load out and be battle ready. With different Exo Suit abilities such as cloaking, extended sprint, boost jumps and hover effectively improving a soldiers strength, endurance, speed and awareness during battle, no matter what game mode you are playing in multiplayer or which abilities you use during the campaign the Exo Suit promises an unparalleled playing experience. Introducing never seen before tactical and lethal equipment, you can choose to carry individual grenades or a multi purpose all in one unit. Staying with the advanced theme there is even a gun that prints its own bullets. Whether it be the futuristic magazine counters built into the guns or the remote controlled equipment available to you, it is impossible to think you are playing a traditional Call Of Duty title.

The campaign mode takes anywhere from 5 to 7 hours depending on how you play the game, meaning that taking your time and really enjoying your surroundings will not only enhance the experience, but will also allow you the player to find and collect all of the hidden intel. With each mission completed after a good hearty length of gameplay and a summary report at the end, you start to realise just how much slower you could have done the missions and achieved everything in that level.

The first two missions I found extremely enjoyable to get me right into the campaign with mission number one showing you how to use the various functions and abilities of the Exo Suit and the second mission being a very clever Atlas Corporation headquarters combat simulation program. Mission three is the epic freeway mission "Traffic" that deserves to be played more than once to really appreciate how much work went into it and get the most enjoyment from it. Magnetic gloves help you get to the hostages, but beware they do not stick to windows!

When it comes to the multiplayer experience, Advanced Warfare offers a Combat Readiness Program. You are playing against unranked opponents that are un-named, some are bots and some are human. In a normal match the players gamertag is visible above their head and in killcams and the player lobby. What this game mode does is ease the newer players into the online experience. Unless you are able to snap on to an enemy in a super fast time frame and accurately strafe and fire in a matter of milliseconds, real multiplayer will see you constantly being killed. Earning only half the XP and getting constant encouragement for kill assists and actual kills, capping flags and holding objectives, the Combat Readiness Program is a great place to start, and even stay until you are ready to venture out into the real unforgiving world of multiplayer.

The prestige mode is back as with past COD titles, levelling up to 50 you have the option to "Prestige". Rinse and repeat up to level 50 Prestige 15 you become Prestige Master. (effectively Prestige 16) You lose all progress towards camo except the ones already completed and earned when you enter prestige mode, you also lose all unlocked weapons and equipment. As usual though you get one unlock token which you can spend on anything you want to permanently unlock that item and keep it through future prestige's. Regular supply drops are awarded that give the player special versions of the weapons that are standard in the game, in the order of Enlisted Superior and Elite. You can get headgear, loadout items, boots and Exo Suits. It has been mentioned that these items are randomly awarded but it has been noticed that if you are the first to be killed in a match you will often be awarded a supply drop for your troubles. Purple or Royal is the new Diamond or Gold. In fact Gold is awarded very easily in Advanced Warfare and is not a special camo at all.

Several of the tried and tested game modes are back with the addition of a couple of new ones and a couple of tweaked ones renamed. There is also a non Exo playlist that lets you play traditional style COD. At first I wondered why there were ladders on buildings when you can just boost jump up to them. Now I know. There does not seem to be many people in the non Exo playlist either and I still have not tried it out. It seems most are enjoying the boost jumping Exo playlist.

The maps in the game are overall a good size. For last gen and current gen the players are 6v6 and 9v9 Ground War respectively. Having another 6 players in the same sized map is a huge deal but traditionally the last gen consoles only get 6v6 multiplayer. There are 13 base maps and one bonus map, Atlas Gorge. There is DLC content coming, dropping every quarter of 2015 that is exclusive to the Xbox system for 30 days before any other platform. The visuals are sleek and clear with vivid colours and great detail. Blossoming cherry trees and water effects, rounded building corners and in game props are aplenty. The last gen consoles get a ported version of the game and after playing on both consoles, the current get in far superior. The developer wants you to get the most from your gameplay experience and I would agree. Get it on the current gen.

In multiplayer, certain things are deliberately omitted. The aforementioned Magnetc Gloves and also the campaign exclusive grappling hook. These items would allow a player to get to spots he shouldn't be. The multiplayer experience is already marred slightly due to the ability to exploit some of the map collision detection which allows players to get out of map anyway. Patches have been released though and until the next exploits are uncovered you can only play around with these during private offline matches.

The game employs skill based matchmaking which much of the community disagrees with. They don't want to play with someone their own skill level, they want to dominate inferior opponents! This is not without merit because by using a skill based matchmaking system it affects the way that the connectivity is optimised. It should optimise connection first then worry about skill, but the game clearly does not. Much of the community has talked about the lag issues in multiplayer and although Advanced Warfare does have datacenters, but it uses a hybrid system mixture of Listen Servers and Dedicated Servers. It also has a maximum ping connectivity allowance of 800ms.

If you are unlucky enough to be sitting at around 700ms and on a Listen Server type connection, your multiplayer experience will suffer greatly. In the first patch that has been released for the game one of the fixes was for "Optimisation Issues". With there now being a 3 year release cycle for the franchise, the developers have had more time to perfect their games and Sledgehammer has used their time well when making Advanced Warfare. The offline modes offered such as the campaign and the Combat Readiness Program and the online modes offering a solid gameplay experience you will not be left disappointed.

The sequel to Radical Entertainment's best-selling open-world game of 2009, PROTOTYPE 2 takes the unsurpassed carnage of the original PROTOTYPE and continues the experience of becoming the ultimate shape-shifting weapon.

As the game's all-new infected protagonist, Sgt. James Heller, players will cut a bloody swathe through the wastelands of post-viral New York Zero (or more simply...NYZ) with unparalleled locomotion, building up a vast genetic arsenal of deadly, biological weapons and abilities as they hunt, kill and consume their way toward the ultimate goal - to kill...Alex...Mercer!