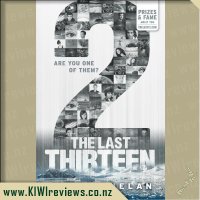 At the end there is only darkness. With the final countdown now only days away, Sam and Eva must brave the dangers of Antarctica to find Alex, the twelfth Dreamer and Gear. An impossible, amazing discovery underneath the ice will bring them all closer to the end of the race, but with betrayal on every side, how can they make it out of there alive? Sam must unite the last 13. Time is running out.

Well, out of all the places to go to try and hunt down a gear is part of a machine that will lead one to some form of gateway that will allow access to a plane of reality known as the dreamscape, I NEVER would have chosen Antarctica!

I have known that Antarctica would be a location ever since book 3, I think? Either way, Alex said he kept dreaming of the frozen south quite often, and when I saw that the landscape on the cover of book 2 was that of an icy place, I put 2 and 2 together. The storyline was full of situations where I couldn't see around the corner and predict what would happen next, except for one plot-point which has been hinted at ever since the first book.

This was the identity of the next dreamer, and I won't give anything away, but I will say this: he is a character who has been with us since the major turning point on the plot of the first book

. Some of the environments described in the book were a bit hard to visualize, but even then, the story was exciting and surreal, making reading the book a highly enjoyable experience I was glad to have. I love how the publishers are giving the book covers a reflective sheen, it gives the illusion of the images looking like silver, just as the sheen on book 3 made it look like bronze. This added effect gives me a growing anticipation for the final book.

The overall mood of the book was quite dark, especially when any of the characters went out into an Antarctic blizzard, as I have a fear of being lost in a cold wasteland, so the fear the characters would have been experiencing partially made it into me, which was weird! I also love how a bit more truth on the function of the Bakhu machine works, as well as the reason for it having that name. The Book ends in a cliffhanger where a small group of characters are exploring some tunnels underground in Egypt, and from the way the book cut off I am betting that the next stage in finding the Dream Gate will be coming VERY early in the next book.

If you could imagine the combined plot of all 13 books as a cave, each book adds a new series of torches, illuminating part of the grand plot. What I love about this series, is that no matter how far through the story we get, the back wall of the "cave" stays in shadow, so I don't think I will know what the Dream Gate is and how the Bakhu machine works until the very end, and I just LOVE that! It is saddening when some of the characters that were present in the first few books disappear, as they then only exist as a remnant, and for some reason I feel sad when the mention of these lost characters causes me to backtrack along the entire series to remember them when they first came into the series.

Overall, I think that this is a wonderful book, and "the last 13" still holds the top spot as my favourite series ever, as the author James Phelan has done a brilliant job of piecing these books together. Well done!

The second to last book and it was breathtaking I was on the edge of my seat while reading the whole time. This book is full of everything that has made the Last Thirteen series so fascinating. There are so many mysterious so many secrets uncovered and betrayal and deception at every turn. We never have learnt who exactly can be trusted in this series and to know who is in it for the greater good and who is there for the ultimate power.

This book gives away more and more surprises as to what the dream gate may actually bring, and they must now in the next and final book travel to the mountain Bakhu to find out where the dreams may lead them next. The interesting thing is the Mountain Bakhu is the place where the sun rises which may give some clues as to what the power that the Last Thirteen must gain control of actually is. Imagine a world where the sun didn't rise where there was nothing but darkness and nightmares perhaps that is the ultimate end of the world.

I am so excited to get my hands on the next book I only wish I had it now as it is going to be so hard sitting and waiting to find out how it ends. This book leaves us on such a cliff hanger with Solaris and I really must see what Dr Dark, Xavier's father is hiding. Have we found another person we can't trust the anticipation is killing me, and I need to know the last thirteen dreamers are going to be okay.

In this book Sam dreams of the end he dreams of flags flying with his name saying he won the race I can only dream that is the case. Xavier also dreams of the end of the thirteen coming together again at last at the gate it's been a terrifying roller-coaster of a ride to the finish but I believe they can make it they just have too. And they have to hurry there are only a matter of days left to win this race and Solaris and Stella are still keen to take out anyone in their path.

I was happy to see Alex have his dream the original three dreamers Alex, Eva, and Sam have now had their dreams and seem to be very powerful competent dreamers, it makes sense that Alex would be close to the end. He retrieves his gear and they get out safe and alive with a little help from the Professor. It's great to see Alex finally reunited with the rest of the dreamers after such a long time with the other side of the race. He is back where he belongs and still on the right side of the race.

I hope that soon I will have that incredible last book in my hands I simply can not wait!!

Quiz Whiz is designed to be used in three ways: children can test themselves and each other with quick-fire quizzes; use the quizzes to gain straightforward question-and-answer information; or enjoy reading through the colourful, informative spreads and hunting for facts.

Following on from Quiz Whiz and Quiz Whiz Nature, this third title in the series contains more than 300 questions and answers about history on its information-rich ... more...