ProdID: 592 - Star Wars : episode 3 - The Revenge of the Sith
Directed by George Lucas 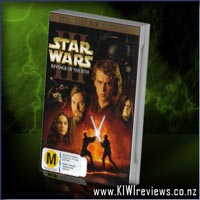 Star Wars : episode 3 - The Revenge of the Sith product reviews

Three years after the initial battle of the Clone Wars, the long and tiring conflict between the Separatists and the Republic is nearing its end. However, Obi-Wan Kenobi, now a Jedi Master, and Anakin Skywalker, now a Jedi Knight, learn a shocking development. Coruscant is under attack! They hurry back to Coruscant to counter the attack led by General Grievous, the leader of the Separatist droid armies, and a much bigger threat than even Count Dooku, a former Jedi turned Sith. They are now charged with bringing him to justice, but there is more going on than just an attack on the center of the Republic.

Little by little, Chancellor Palpatine transforms the Republic into a tyrannical regime, putting him at odds with the Jedi Order and a few non-corrupt senators, who have all grown weary of his staying in power. Anakin, on the other hand, has grown closer to Palpatine, but he also suffers from disturbing visions of his wife-in-secret, Senator Padme Amidala. He has been leaning closer and closer to the dark side since before the Clone Wars began, and Palpatine encourages him to embrace it.

When it all comes down to it, Obi-Wan Kenobi will have no choice but to face his former apprentice in battle, and as the Clone Wars end, the seeds will be sown for yet another conflict which will determine the fate of the galaxy.

The final episode of the pre-trilogy and the last of the sextuplet known as 'Star Wars' - this movie was by far the prettiest, darkest, most moving of the lot. Having said that, I am having great difficult watching it again because it was just so damn depressing.

It was cool seeing the birth of Luke and Leia and finally getting the context of the (next?) three movies. But at the same time, the sacrifice it took for all that to happen... *Sniffs* I admit that I never liked Anakin. He was worse than Luke on a scale of whineyness (yes it does run in the family). I think becoming Darth Vader was the best thing that ever happened to him. Unfortunately, the only character I actually did like had to fall in love with said whiney fool and then... well, let's just say she should have gone for Obi Wan - he was way cooler.

Still, 'fan girlness' aside, the effects on this movie were truely top of the line. The dialog actually flowed and the action was pretty much non-stop. If you've watched any of the other Star Wars, you have to watch this one, and if you haven't seen Star Wars at all... well... you should. Then you can say, with complete certainty, exactly what you thought of it.

For me, this was one of those films where I completely lost track of what was going on; not because it was difficult to follow, but because I was bored. The story is a good one, and there are some moments which could have been powerful, but are transformed into a bad attempt at soppy melodrama by Hayden Christensen's acting. The script, particularly Anakin's and Amidala's lines, didn't help. As a result, I wasn't paying much attention to what were probably some excellent special effects and action sequences.

I've seen the other five films, and enjoyed them, several times; as for Revenge of the Sith: it's worth seeing if you've watched the rest. The politics and much of the action were great, and I enjoy thinking back on them - those parts of the film fit nicely into the series - but sitting through the entire movie again might be a bit much to bear.

WOW! I could actually leave it at that and you would understand why, about 3 hours after you walked out of the cinemas. (It would take you that long to flip back to the 'real world') But that wouldn't really be a 'review' per se, so here we go.

Of all 6 movies, I personally feel this one is by far the very best. A movie of births and deaths... the birth of Darth Vader, the birth of Luke and Leia, the birth of the Galactic Empire and thus the Rebel Alliance as well, and the death of a significant portion of the rest of the universe, including most of the Jedi.

With action and significant plot-pushing scenes packed into every available second, minimal 'fluffy stuff' that does nothing to further the plot (which was what let episode II - Clones, down for me), this was by far the best in my book, and I AM SO HAPPY to finally have it on DVD.

I don't want to go into too much detail, because I honestly feel you will appreciate the movie so much more if it is all new to you... and if you have already seen it, you'll have your own opinions and don't need me to be recapping the movie for you... but here is some information you might not have been aware of...

•  There are over 2,200 special effects shots in this film, more than Episode I and II combined. Star Wars (1977) only had 350 such shots.
•  George Lucas makes a cameo appearance in the Water Opera scene as the blue skinned Baron Papanoida.
•  Ewan McGregor (Obi Wan) and Hayden Christensen (Anakin) trained for two months in fencing and fitness in preparation for their fight sequences. (And it REALLY paid off. Even discounting camera tricks, the fight scenes were stunning. As a swordsman myself, I know of what I speak.)
•  Obi-Wan Kenobi says the series' trademark line, "I have a bad feeling about this," during one of the first scenes of the film.
•  The last scene of the film was the first scene filmed.

Overall, stunning, totally stunning. I going to watch it again and again... I don't think I'll get sick of it any time soon. That doesn't happen very often, especially with some of the disasters I have had to endure from the big screen lately.