The Wolf of Wall Street review 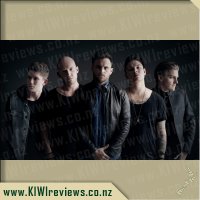 Black River Drive's first single, "Bullet for your Gun", received extensive radio play and reached #1 on New Zealand radio station The Rock FM, holding that position for 5 weeks The Rock's weekly countdown. Their subsequent single "Call The Doctor" also went straight to #1 on the same countdown staying there for 3 weeks.

Black River Drive toured New Zealand extensively in 2010 and 2011, and then started working on their second album, due for release on November, 7th, 2014.

I have seen had the pleasure of knowing this band since it's first huge hit back in 2010, and have seen them perform more times than I can count,(and certainly don't have enough fingers and toes to attempt it).

With the release of their sophomore album on November 7th, they took the plunge and headlined their first tour, so I decided to go along to a couple of shows to see how the band was going. Being kept up to date with the bands progress with their album, I knew what to expect with respects to musical content. What I was really interested to see was their performance.

Their gig at Hamilton's 'Altitude Bar' was surprisingly one of the best gigs that I have witnessed at the venue. I'm not saying I was expecting it to be bad - quite the contrary - I just wasn't expecting them to blow other more established bands that have performed there in the past (Blacklistt, Devilskin, I Am Giant) out of the water. While attendance was on the light side due to a sports final, the band came out and played as if they were the final act on the Main Stage of Big Day Out.

The group have grown past the stage of technical difficulties, and mastering their songs live, and are finally perfecting their stage performance. Strutting about the stage, jumping, spinning, contorting along with the music, it was a sight to behold. They have grown up, matured, and they still get a rise out of seeing the crowd go wild. The music had clarity to it, the power chords were deliberate and didn't stray. The vocals were on the dot, and the backing vocals were in tune.

With music that seethes with influences from such legendary acts as Led Zeppelin, and Tool, they are keeping alive a genre that is being overcome with the generic and mainstream. With upcoming gigs in the South Island, I can't wait to see the response from the fans. These boys have gotten their s**t into gear, and I sincerely hope to see rock fans from all over the country flocking to appreciate them.

They're arguably the most successful punk rock band to bust out of Southern California but they don't have a greatest hits album? Well they didn't, until now! Straight out of Orange County to your door, The Offspring have been one of the most consistent and exciting punk rock bands ever to grace your stereo. Here's their greatest hits collection along with a brand spanking new track too!