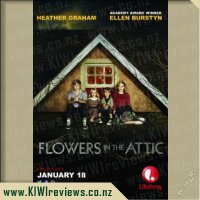 Flowers in the Attic (2014) product reviews

Based on V.C. Andrews' controversial cult-classic novel, "Flowers in the Attic" tells the story of the Dollanganger kids who, after the unexpected death of their father, are coerced to stay hidden in the attic of their ruthless grandmother.

Years ago I signed a petition to get this remade, after the original movie (1987) ended so terribly, with the mother being hanged after Cathy forced her to have a bite of the poisoned cookie. Although, even though this movie stuck more closely to the book they still took a lot of liberties and over-explained a lot. I didn't agree with the casting, instead preferred the original and I didn't like how they portrayed Chris and Cathy's relationship, making it way more incestuous than it really was. In the book he raped her but in this version they 'made love'.

They also changed what character actually said what and missed key characters. I have always blamed John the butler for the grandmothers state of mind and in this adaptation he was not included, well there was a 'John' but definitely not the same person.

The grandmother also seemed harsher and meaner than she should of and when she raised a fist to the children saying her 'word is law' my husband asked what was going on. I explained the four books and then he asked 'how could you read/watch this??'. I could not come up with a real reason except I really need answers how anyone can do this to their own family, people she was supposed to love.

For those of you who do not know about the 'apparent true story' here's a quick recap. Chris (the father) is killed in a car accident and with no real means of survival Corrine returns to Foxworth Hall where she wants to regain her fathers love and be written back in to the will. Part of the will states that she will not receive anything if she had children. So she locks her children up in the attic on the pretence of regaining the fathers love and getting the money to take them away and live happy lives again. Unfortunately, her love changes for her own children and instead (I assume) enjoyed the freedom and money too much.

I did like how the grandmother blames the mother for everything, as that is really what happened. The original seemed to blame the grandmother, who I feel is misrepresented. She does warn the children not to eat the cookies. I think the movie needed to focus more on Chris Jnrs desire to be a doctor and focus more on him finding out why the mouse died and then why Cory got sick, like the original did.

If there is another petition going out there I will be one of the first to sign it again. I understand you can't follow a book word for word. But, the point of this remake was to be closer to the book and it was still miles away from it. Still a good watch, especially if you know nothing about the terror that went on in the attic. Can not wait to watch the sequel Petals in the Wind.

Action, Adventure and Fantasy Await in this exciting new chapter of the Dragonheart Saga.

Patick Stewart voices Drago the magnificent dragon who became bonded with King Gareth. When the king dies, his potential heirs, twin grandchildren who posses the dragon's unique strengths, use their inherited powers against each other to vie for the throne. When Drago's source of power -0 know as the Heartfire - is stolen, more than the throne is at stake., the siblings must end their rivalry with swords and sorcery or the kingdom may fall.