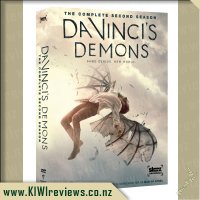 Florence is thrown into chaos in the wake of the Pazzi conspiracy and Leonardo da Vinci must push the limits of his mind and body to defend the city against the forces of Rome. When the dust settles, friends are buried and rivalries enflamed. While the Medicis go to unthinkable lengths to deal with new threats, da Vinci continues on his quest to find the fabled Book of Leaves and uncover the secret history of his mother. He'll come to realize that he has lethal competition in his quest -- new enemies who may be even worse than the forces of Pope Sixtus. His search will take him to faraway lands and force him to reevaluate everything he knew about the world and his own history.

We'd really enjoyed watching Da Vinci's Demons when it first came out and watched season one, really enjoying it so watching season two was a must.

When it starts it is a little bit confusing but then it jumps back to however many months beforehand and we then join Da Vinci immediately after the events of Season One, which left us with one heck of a cliffhanger where Count Riario and the vatican were attempting to take over Florence. Da Vinci helps Lorenzo to escape and to survive as the palazzo is taken over. There is a lot going on between Da Vinci trying to find the Book of Leaves, find more to the mystery that is his mother and generally survive. There are a few stories going on and so plenty to keep you going.

The acting is well done and keeps you on your toes throughout the season, this one is slightly longer in that it is a ten episode season, not an eight episode season and thus you can get a little bit more in to the overall story lines. There is plenty of intrigue, murder, mystery, action, sex and exploration with, of course, a few fantastic inventions (most very much being done spur of the moment) from Da Vinci. This was a fun season and I'm looking forward to season three.

In this second season box set, Mulder and Scully get glimpses of the global conspiracy as they investigate UFO's, alien abductions, genetic engineering, and ominous government agents.