« The Blacklist: Season One review 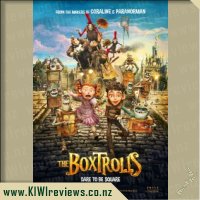 The Boxtrolls, a community of quirky, mischievous creatures, have lovingly raised an orphaned human boy named Eggs in the amazing cavernous home they've built beneath the streets of Cheesebridge. When the town's villain, Archibald Snatcher, comes up with a plot to get rid of the Boxtrolls, Eggs decides to venture above ground, "into the light," where he meets and teams up with fabulously feisty Winnifred. Together, they devise a daring plan to save Eggs' family. Based on the children's novel 'Here Be Monsters' by Alan Snow.

I had heard about how much this movie was loved by friends with young kids so when I saw it was one of the Watties Can Film Festival I thought it would be a good movie to take the kids to and if we don't like it then it is not too much of a waste and it is for a great cause. Previous years I have come out the movie thinking that I would be buying on DVD for the kids to watch over and over but this time I came out the theatre thinking "what the hell were those people thinking promoting this as a child's movie?" and my money will stay safely in my pocket.

My four year old son who is a little rat bag and who I thought would be ok with the movie sat in the seat next to me and he kept wanting to cuddle up to me and hide his face as "the movie is scary" and he didn't like it, he did like some parts that were a bit funny but overall he thought the movie was scary. My six year old didn't have much to say and he normally gushes over how much he loved the movie and is the first to ask when I'm buying it on DVD for them and my 15 year old said it was too scary.

Personally I thought that the movie was well done but a bit too much for a child to take it all in, the good guys were obvious to see but they were made out to be the bad guys and no one would listen to them. I liked how they explained how Eggs became part of the boxtrolls and even the kids laughed at the naked boxtrolls. The art work was amazing but that was about the only good thing I could say about this movie.

I was told by someone that she was told the movie might be too scary for younger kids and I kind of wish I had listened and taken the kids to see one of the other movies but I'm glad that we did go and see this and now know not to put this movie onto a Christmas wish list. I would recommend to parents of slightly older kids, but the question in my mind is why it was marketed to such a young audience?

I had promised my son we would go for his birthday and I was lucky enough to win four tickets to it before it was released to public cinema sales. We got to see it in 3D, which at first was a little dizzying but once we adjusted to it, there was no issues with it at all. We meet Eggs as a baby, when it is alluded to the Boxtrolls kidnapping him, and watch as he grows (but it's one box for life so that never changes) and we have a glimpse into his life but also watch the number of Boxtrolls decrease as Snatcher, true to his name, snatches the trolls. I love the the trolls are named after the picture on their box, so there's no chance of confusion as only one troll was called Sweets, Fish etc.

Once Eggs ventures out into the world it is to try and save his family, Winnie is a strong headed girl who's father is too preoccupied with cheese, who befriends Eggs and ends up helping him with his quest. Snatcher is suitably nasty and there were a few icky moments with him that had the kids in the cinema laughing their heads off. My boy and girl were glued to the screen for the entire movie and thoroughly enjoyed themselves. Staying to watch some of the credits I was delighted to hear a remake of "Little Boxes" a song I found on youtube by Walk Off the Earth a few years ago, and hang around for a couple more minutes and there is a delightful little scene of two characters commenting on the end of the movie but then you see the person making them move (as it is a stop-motion movie) which is a great little insight for everyone to see just how much work goes into it.

The kids loved it and I can tell they will be requesting it on DVD when it comes out, something I'm happy to do as it is a delightful film.

Score: 9.0
Product reviews for listing 1751: The Brave One
Directed by Neil Jordan

Neil Jordan's 'The Brave One' stars Jodie Foster as a happy woman whose life changes irrevocably after a brutal assault leaves her partner dead.

The woman, feeling that the police investigation will be unable to catch the perpetrators, begins to live in constant fear. This outlook results in the woman eventually dispatching vigilante justice. Terrence Howard co-stars as the officer in charge of the ... more...