« The Dinosaur That Pooped The Past review

The Blacklist: Season One review 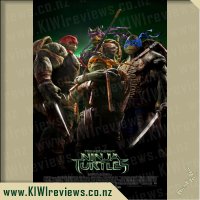 The city needs heroes. Darkness has settled over New York City as Shredder and his evil Foot Clan have an iron grip on everything from the police to the politicians. The future is grim until four unlikely outcast brothers rise from the sewers and discover their destiny as Teenage Mutant Ninja Turtles. The Turtles must work with fearless reporter April and her wise-cracking cameraman Vern Fenwick to save the city and unravel Shredder's diabolical plan.

'What are you?'
'Well miss we are ninjas'
'We're mutants'
'Technically we're turtles'
'And we're teenagers'
"so you're...... teenage mutant ninja turtles?'

Okay in the movie it sounded awesome when Michelangelo, Donatello, Leonardo and Raphael said it to April O'Neil. But at the same time it did not, as I don't think the casting was that great with the voices, they grow on you but I don't think it was the perfect match.

I am old school and the cartoon used to be fantastic. It is such a shame when the higher powers above decide to play around with something and they end up butchering it. It took me three times to watch the movie in its entity. The first time I fell asleep, the second time I fell asleep and the third time I cringed my way through the movie. I think because they wanted a lower rating for the children with a PG13 they dumbed it down far too much and spoon feed everything. The acting, script everything was just so badly done which is surprising when dealing with such a high ended budget. 'Back in my day' the turtles fought the Shredder and the Brain and it was always entertaining, also they won most of the time which was great, but this well it had its issues and lacked on turtle time.

My biggest problem would be the casting of Megan Fox. I really liked her in Transformers but its like she dumbed down for this. She played April O'Neil the reporter, who was always in the background of the story but instead in this movie she took centre stage and it was focused more on her than the turtles. Her over dramatising of everything just made my skin crawl. It felt like she needed to take acting lessons because she was terrible. Also don't get me started on her back story and how it related to the turtles it was just way beyond silly.

Usually the turtles are fun and enjoyable to watch but this felt more like a chore. The only time I hinted at a smile was the elevator scene and really I could have spent an hour just watching them beatbox instead of the dribble I ended up seeing. If I had the choice I would wipe it from my memory as it is just horrible.

My flatmates decided to bring back the "boys night out" and looking for a reasonably cheap option, we inevitable ended up in the cinema. I had already seen 'Guardians of the Galaxy', and another flatmate had already seen 'Lucy', so we were reasonably limited in choices. We pitched TMNT, and while nobody was actively wanting to see it, nobody had any objections to seeing it either. After the film, we spent about an hour and half laughing and discussing the film. Unfortunately, we weren't discussing the positives...

In short, the physics of this movie were horrific. You see some amazing feats of strength, but then see them trapped by something far more fragile. You see them all fighting and exploding (Michael Bay!) on buildings, but their weight (and knives) can apparently bend U-Beams.

The kids would most likely enjoy this film, but it really failed to appeal to me. It was needlessly dark, with some slimy looking CGI. Even the nostalgia of the TMNT franchise did nothing to make this more appealing for me. If I hadn't been at the cinema, I would have walked out (and I contemplated leaving and waiting outside for them, twice!)

Apart from Megan Fox (who looked stunning again), my favourite part was during the credits, watching the turtles on the billboard (I won't say any more than that, I won't ruin the funniest part of the film). I would have loved to have seen more of the TMNTs sneaking around the town before everything goes wrong, but instead I was chucked head first into a movie that truly angered my science brain. Don't even get me started on Shredder and his armour...

Young male children will love it. Send them in with some friends. Save yourself.

In a dynamic new portrayal of Arthur Conan Doyle's most famous characters, 'Sherlock Holmes' sends Holmes and his stalwart partner Watson on their latest challenge.

Revealing fighting skills as lethal as his legendary intellect, Holmes will battle as never before to bring down a new nemesis and unravel a deadly plot that could destroy the country.

The action-adventure mystery 'Sherlock Holmes' is directed by acclaimed ... more...