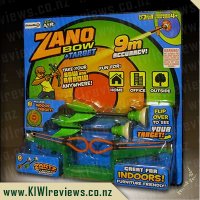 Disclosure StatementFULL DISCLOSURE: A number of units of this product have, at some time, been supplied to KIWIreviews by the company for the purposes of unbiased, independent reviews. No fee was accepted by KIWIreviews or the reviewers themselves - these are genuine, unpaid consumer reviews.
Available:
See the Stockists list on the website

The Zing Air Zano Bow is the perfect indoor Archery Set! The Zano Bow shoots arrows over 9 metres that stick to almost any flat surface. Set up the wall target for awesome indoor target practice in the bedroom or the office!

The Zano Bow and Target is an awesome toy that the whole family has enjoyed, including Nan and Grandad! We have had a great time out in the sun spending many hours setting new targets and challenges with the arrow and made up a few games to play also. Miss 9 and Mr 7 had it mastered almost straight away, Mr 2 found it a little more difficult to get the "arrow" to stay in the bow but once he got that he was away laughing and no longer wanted to share. He is even just as good as the older kids at hitting the targets!

I was surprised and impressed by how far the arrows can fly! I also found it interesting how differently each of my children held the bow, each method used worked just as well. Dad too of course had to have a turn and encouraged the kids to set up multiple targets and enforced a points table. I love that the arrows are made of a soft type of foam to take away the risk of any injury.

Everybody enjoyed the Bow and Arrow and I will be looking into other products from the range as gifts. I love things that the children can enjoy together and that creates something fun for them to bond over. Definitely a huge hit!

My youngest is a real action junkie I think. Full-on fun is the only kind, for him. When he saw this and found out it was one I was going to hold on to for review, his first question was "Is it for me? Please?" - How could I say no... so it was off to the park to play!

He found it a little tricky at first, trying to get the arrow to hook into both loops, so the first few attempts were less than thrilling for him. After a bit of guidance, he quickly got the hang of it and was off playing "Robin Hood" as though born to it. He was in awe at the range he was able to get, though it was less than the promised distance. Still, quite understandable really. We also discovered that he was holding the "zart" by the tail fins so a quick correction soon had him getting a few extra metres of distance, which pleased him no end.

Without prompting, he set up a target range using the beer cans he discovered hidden under a nearby bush, and after a few range-finding shots was soon pinging them off the rubbish bin lid at least half the time. He was quite reluctant to pack up and head off when it was time to go home, but a promise that he could set up his target practice range at home another day soon smoothed over his grumps.

Overall, this is an excellent toy for the younger kids. While I agree with the age range, I know that level-headed kids younger than this could get quality fun time out of it under adult supervision. I only wish they made bigger versions with a greater draw on them, because this would be great fun for adults too!

We love this product! It is so much fun for the whole family and had my son playing with it for hours - making up his own games and setting up different challenges - judging by the constant chatter and intermittent giggling, he was having a great time. More importantly, it kept him off the computer which is not an easy task and considering he doesn't really play with toys these days, this product was definitely a winner.

It was a little bit fiddly for him to get the hang of to start with (good for working on those fine motor skills) so I would recommend it for ages 7+, but once he'd figured it out he was away laughing. My house was instantly turned into a war zone and I was careful about checking around corners before stepping out. We also discussed responsible play, as in not shooting at people and being careful when shooting inside - if shot with enough force it could easily knock things over or break something. The arrows have foam suction cups so are gentle on walls and windows even when it sounds quite forceful.

The product is quite sturdy and has so far withstood my son's rough play. I was impressed with how far it can shoot and my son had a great time trying (and often succeeding) to shoot it the length of our house. My partner also felt the need to have a turn when he got home from work.

I'm more than happy with this product and with Christmas coming up I'll be looking to see what else Zing Toys have to offer.

The Crossbow looks and feels like a real Crossbow but shoots safety sucker darts. Can shoot over 12 metres!!

They have a one piece body and the stock is made from tough, high quality plastic. The bow is spring steel and is fitted with sights for accurate firing and comes with 3 coloured sucker darts.

The bows are lightweight for indoor and outdoor use with a target on the back of the box.