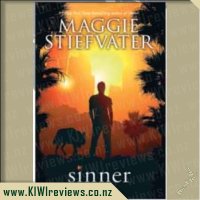 Cole St Clair has come to California for one reason: to get back Isabel Culpepper. She fled from his damaged, drained life and damaged and drained it even more. He does not just want her. He needs her. She can play the game as well as all the other fakes. Cole and Isabel share a past that never seemed to have a future. They have the power to love each other and the power to tear each other apart. The only thing for certain is that they cannot let go.

I knew nothing of Maggie Stiefvater's writing before I received this book, and it was needless to say that I was surprised at the opening sentence of the book; juxtaposing the description of the book that you can read above, a supernatural element had instantly been added.

As I read on, I very quickly noticed that there was a lot of backstory. While a lot of elaborated on during the novel, it was obvious that there was a far richer story that I had missed out on. A bit of research into 'The Wolves of Mercy Peak' told of a trilogy of novels that follow the workings of a supernatural "wolf" pack and their conflicts with the human environment.

It became apparent that 'sinner' was a story to wrap up the loose ends of the romantic love interest from the trilogy. While an interesting novel in itself, I couldn't help feel that I was missing something, having not read the trilogy previously. The supernatural elements in the book - despite being the first thing referenced - take a step back, and really provides very little extra to the story beyond being a good substitute for general drug or alcohol addiction.

The storyline was rather slow, compared to my usual reads, and I couldn't help but wonder what the overall point of the book was; without significant action, the story seemed to amble and loiter around. There were no real threats, and no significant consequences to anything, until towards the end, but even that seemed to end with an anticlimax. Plot aside, the book was an easy read, with short chapters, and an interesting method of switching narrators between chapters. Cole St Clair was an engaging character and focal point that I generally enjoyed.

I can see how someone who had read three books previously that involve these characters, would love to see it wrapped up in the way that it does, but as a standalone book, I was a little disappointed. It made me want to read the trilogy, because I felt like the story was missing something integral, and therefore didn't really feel like a standalone book at all.

I have previously read some of Maggie Stiefvater's books and really enjoyed them so it was a no brainer that I would be requesting this one. Yes it did live up to expectations, the characters were great but I did realise that I would need to read the previous books to find out the full history of Cole and Isabel.

The story was easy to follow, each chapter followed the story from either Cole or Isabel and the language was easy. The pace was fast and kept the story moving so you don't get bored. This was a love story with a difference, it was easy to see that they needed each other and that there was no secrets between them. I am glad that Ms Stiefvater doesn't resort to using sex scenes to sell her books which is a good change.

I really want to read the previous books now, I am sure that it will just complete the whole story and finally answer some of the questions, you get some of the history by what is said by some of the other characters and "flashbacks" but there is not a full history given.

I would read the book again, I know it is not for everyone as you have to believe in in mythical creatures and have a very open mind when reading this book but it is worth the effort.