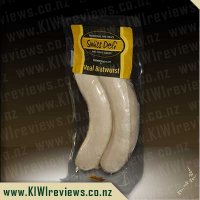 Disclosure StatementFULL DISCLOSURE: A number of units of this product have, at some time, been supplied to KIWIreviews by the company for the purposes of unbiased, independent reviews. No fee was accepted by KIWIreviews or the reviewers themselves - these are genuine, unpaid consumer reviews.
Available:
at selected quality retailers and the factory shop

SWISS DELI ® Veal Bratwurst is prepared using the finest quality veal and pork. With a fine texture and mild flavour (mace, lemon), it is a very versatile product that will be enjoyed by a wide range of tastes. Whether pan-fried or grilled, it is especially popular when served hot from the BBQ with a mustard accompaniment.

I like the fact I am not bombarded with information on the front of the packaging and can clearly see the product. The colours on the labels are a perfect blend that is carried through to the back. The easy open corner is also a huge bonus for this type of product eliminating the need to use scissors or a knife. My only issue with the label is that the "contains diary" is not in a bold font.

Never having had bratwurst I was slightly confused as to how to cook them and decided it must just be like any other sausage. While I've read bratwurst have a high meat content around 80%, I think Swiss deli have delivered a rather meaty sausage with the 77.44% as per the label. I don't think they could have got much more meat in there if they tried.

Flavour wise it's not a bad sausage and the price/quality go hand in hand. After just one, the taste has me wanting to head out and get more, so I am glad they come in a twin pack. I personally think they need to be bbqed, topped with a little mustard and on sauerkraut in a warm crusty roll. This thought still has me drooling.

Compared to other sausages per 100g, these don't have as much energy (kj) but smash them on everything else from protein to sugars and really after two, you know you have eaten.

I have never tried Bratwurst before so unfortunately I don't have anything to compare it with and therefore can only write based on my experience of what I thought of these Swiss Deli pack I was given to review. I was looking forward to seeing what the packet of two sausages had to offer me.

When we got the packet, Ww weren't sure if they were pre-cooked or not. They looked to us like they were but we didn't see anything to confirm this on the packaging. We cooked them in the frying pan over a low heat. When heating them, one of them split right open. They did become slightly golden in colour on the outside. I thought that as there were only two sausages, we could slice them up so the whole family could try them. I added a little bit of cheese and sweetcorn relish to some of the slices to see whether they tasted nicer by themselves or with some additional flavours. I found that the sweetcorn relish overwhelmed the flavour bratwurst but the addition of the cheese by itself tasted really good.

I found that the flavour of the bratwurst was mild and tasty. My kids liked them but my husband thought they were rather average and nothing to write home about. I couldn't pin down what flavour caught my tastebuds, but it seemed a little like smoked frankfurters. I felt that the texture was similar to that of a cheap sausage like the pre-cooked one you get in a big bag at the supermarket.

The fact that these sausages are gluten free is a huge plus for people who require this feature for their diet.

When we initially looked at the packet of sausages, my husband made the point that they were veal sausages and they only contained 19% veal. We would usually expect that something marketed with a specific item, in this case, veal, would have that as its main ingredient. To be fair, I did a bit of research online and found that Bratwurst is usually a combination of pork, veal or beef and therefore it might be reasonable to expect that pork could be the base ingredient with veal being the special ingredient and therefore acceptable to market its inclusion rather than the main ingredient of pork.

It wasn't until after I had enjoyed the bratwurst that I looked at the price of them. I do think that $6.99 is rather steep for just two sausages. I am unlikely to purchase this product again.

It was one of these nights where I needed to get dinner on the table quickly and I was sick of the usual unhealthy quick dinners we had had lately. I had lots of fresh veges and some Swiss Deli Veal Bratwurst and Spanish Chorizo in the fridge. I decided that we would make our own Shish kebabs. All I had to do was slice up the vegetables and cook the meats and the vegetables. With all the fussy eaters in my household it was a great hit as they could have what the wanted and nothing they didn't. The veal bratwurst disappeared very quickly. Miss 4.5 and Miss 6 didn't even both putting it on their sticks. It was going straight into their mouths.

I was surprised to see that the bratwurst was such a hit with my daughters as they are usually a cheerios or sizzler sausage type. Both my husband I I enjoyed the bratwurst but found it a bit bland for our tastes. The girls didn't complain when we offered more. Together they had most of the packet in the one meal.

As the packaging says this is a premium quality product. It was a beautifully smooth texture with on gristle or rubbish it in. The price reflects this and makes it a special occasion food rather than something you would serve regularly. I am sure my daughters would be delighted if we served this up again.

Real Rice Sticks add a modern touch to rice made snacks. Made with brown rice and rice bran oil, and hot air baked, they are light, crunchy, and very tasty. Their unique mouthwatering flavours are hard to resist. They are perfect for light snacks, lunch boxes, and gatherings with friends and family. This crunchy premium rice snack will tantalise your taste buds.