« Any Given Sunday review 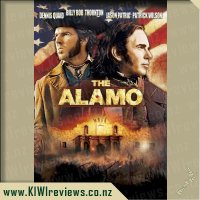 The Alamo retells the story of the historic 1836 battle in the Texan War of Independence. Facing 4,000 Mexican troops, 186 Texan soldiers and volunteers -- including William Travis (Patrick Wilson), Davy Crockett (Billy Bob Thornton), and Jim Bowie (Jason Patric) -- retreat within the walls of the Alamo, a Franciscan mission that was converted into a military fort. Once inside, the men prepare themselves for what will be a bloody battle to the death, as General Sam Houston (Quaid) leads the charge from the outside.

This film...well I think I am going to struggle coming up with 200 words to cover this film. A re-telling of a historic battle between Mexico, and some Texan soldiers and volunteers. For anyone that didn't know what happened, the opening scene gives you a preview of the upcoming massacre.

Focusing more on the political unrest between the soldiers and the volunteers, there were very few moments that would be considered action-packed. The film was lethargic, and rather pointless; it provided no interesting new information, was not fast-paced or exciting, and unlike most war stories, did not fill me with a sense of patriotism.

I disliked the characters immensely. They were needlessly arrogant and provocative.

That is really all that I can think of to mention about this film. The plot was not only thin, but it was short too, which made it even harder to enjoy. Even the ending of the film gave me no satisfaction, and was tiresome. It would have been much better if it had ended at the Alamo, and hadn't gone on with the revenge sequence. It was unnecessary, and detracted from the main theme of the film.

I am incredibly disappointed in this film, especially as it is a reasonably recent film. The story had potential, but the acting, and characters, doomed this historic battle.

Berlin student Jule is hopelessly indebted due to an accident she caused, hitting a rich businessman's limousine.

Evicted from her flat, she moves in with her boyfriend Peter and soon learns that Peter and his flatmate, Jan, are breaking into luxurious mansions at night. Instead of stealing or vandalizing, though, they carefully and ... more...