Home > Categories > Entertainment > Television > Doctor Who: The Next Doctor review 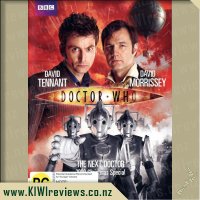 Doctor Who: The Next Doctor product reviews

It's Christmas Eve in 1851 and Cybermen stalk the snow of Victorian London, in this special Christmas edition of Russell T Davies's Bafta Award-winning time-travelling drama.

When the Doctor arrives and starts to investigate a spate of mysterious deaths, he's surprised to meet another Doctor, and soon the two must combine forces to defeat the ruthless Miss Hartigan. But are two Doctors enough to stop the rise of the CyberKing?

Inside the Animal Mind
Rating: 8.3

The Doctor, fresh from saying his sad farewell to Donna, is off on another adventure.

This time he lands on Earth in 1851 when he suddenly hears someone crying for help from the Doctor, off he rushes and discovers a man who calls himself the Doctor and off they go to try and save the day. As our Doctor tries to work out how far in his future this regeneration is, the new Doctor is trying to uncover what is hiding beneath his amnesia. What we come across next is the Cybermen and their attempt to create a Cyberking and take over the human race, yet again.

The storyline is fun as the two Doctors try to get through their confusion and work out exactly what is going on, as well as a little bit of humour as we meet the second doctor's companion and his Tardis. The plot is good and it is fun but I didn't find the Doctor's role in it to be that great, but most of the attention is on the new Doctor and he does a really good job. I like that the Cyberking is actually a woman but of course, since the Cybermen don't bother about gender, no one bothers changing her name etc.

A fun addition to the series.

There was just a bit of confusion as there seemed to be another Doctor but the he was not as adventurous as the Doctor and he had been keeping some suitcases from the one man who had gone missing without any trace. I did have a good laugh at the Tardis of the second doctor as I was expecting something much bigger and a lot more advanced than what he offered but in the end it was perfect for the job.

There was a bit of confusion as they unravelled how the other doctor fit into the story, just to realise that there is really only one doctor and that he hasn't regenerated into what he thought was himself at some point in the future and the Doc as usual applies logic to solve the problem.

The directors made a bold choice in having the CyberKing be a female (I didn't realise that gender didn't make a difference and was kind of wondering why they didn't call her the CyberQueen). It was good to see that the super bad villain wasn't automatically a male.

I can only imagine how much fun the costume department and props would be having coming up with the great costumes and sets and how when you watch it then you can't imagine the scene being done any other way.