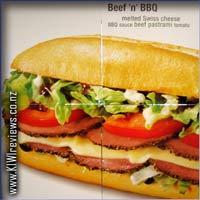 A toasted deli-style 7" bun, lettuce, tomato, beef pastrami, fried onions, melted cheese and a BBQ sauce. Also available in a combo, with fries and a drink for $2 extra.

I have, over the last few years, found many MANY reasons to be dissatisfied with McD's... in some stores it's the staff, in some the food, in others it's the sanitation (or lack thereof)... but occasionally they are the only place around that is open/available when the hunger fairy pays a visit to tummy-land.

So it was that I was heading out of town for a 3 hour drive, and realised that if I didn't grab fod before I left I would be making a pitstop shortly at McD's Bulls... a place I would far prefer to pass over. So, a quick detour into the drivethru. The lovely lady standing about in the rotten weather with her watertight PDA was ready for my order, and I quickly chose this appealing-looking item off the menu. However, since I absolutely HATE their BBQ sauce, I asked very nicely for another dressing, which they granted me. Made such a big deal about it, you would have thought I was asking for a gold-embossed napkin or something... they get all uptight over the stupidest things at times.

Now here is where it gets interesting, and somewhat confrontational... fresh food can NOT be fresh if it is pre-prepared, but when you are in a hurry you are loath to be waiting around for them to cook it all up. In the case of their standard burgers, you can reasonably expect a rapid turn-around time, since they make them by the batchload... however this new menu claims to be 'freshly prepared when you order', which is a good idea considering some of the ingredients (such as the fried onion) rapidly lose all flavour if left too long.

So it was with some modicum of interest that I sat in my car in the waiting bay for my deli-style sandwich... and was quite impressed that I received a knock on the window after only 3 minutes. This is indeed a good turn-around for a freshly-made ANYTHING, from McD's.

The sandwich was a bit awkward to try and eat, since the wrapper doesn't really allow for one-handed consumption... you really need both hands to peel it open without dumping the contents on your lap. However, a few moments parked on the roadside, and I soon had it rewrapped for easy one-handed operation and off I went. The flavour was wonderful, with the Ceasar dressing adding a really nice tang to the pastrami, which is similar to corned beef with a cracked pepper and spice coating on the edges...

Overall, the portions are a tad on the small side, especially considering the price... after all, you can buy a fully-fledged Boss burger for 50c more... but the flavour really was something special. The prep time is quite good, if the right staff are on the job, but I will admit to being somewhat disappointed overall. It's good, but not great, and I'm certainly NOT Lovin' it.