My Gentle Barn: The incredible true story of a place where animals heal and children learn to hope review

ProdID: 5729 - The Amazing Spider-Man 2 - The Rise of Electro
Directed by Marc Webb 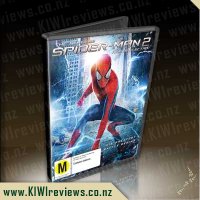 The Amazing Spider-Man 2 - The Rise of Electro product reviews

We've always known that Spider-Man's most important battle has been within himself: the struggle between the ordinary obligations of Peter Parker and the extraordinary responsibilities of Spider-Man. But in The Amazing Spider-Man 2, Peter Parker (Andrew Garfield) finds that a greater conflict lies ahead.

It's great to be Spider-Man. For Peter Parker, there's no feeling quite like swinging between skyscrapers, embracing being the hero, and spending time with Gwen (Emma Stone). But being Spider-Man comes at a price: only Spider-Man can protect his fellow New Yorkers from the formidable villains that threaten the city. With the emergence of Electro (Jamie Foxx), Peter must confront a foe far more powerful than he. And as his old friend. Harry Osborn (Dane DeHaan). returns. Peter comes to realize that all of his enemies have one thing in common: OsCorp.

I truly wanted to like this film. When I look back, the original trilogy was rather horrendous, but the first film from this most recent remake was darker, action-packed, engaging, and more intense. This latest Spider-Man offering lacks all of these things. I will admit that there were a few dark parts of the movie that I was surprised to see included, but in general, the film returned to that happy, goofy, irresponsible Spider-Man that Tobey Maguire had originally brought to the table.

This film was over the top in its approach to characters, with more of a cartoon feel to it, rather than something appropriate for the silver screen. Considering how fell Emma Stone managed to play a teenager in 'Easy A', I was shocked at how old she looked in the film. Both Emma Stone and Andrew Garfield looked like they were adults dressing up as teenagers; it lacked authenticity and believability.

I wonder if this film had a video game made around it? Watching some sequences, I could clearly tell it was fully computer generated, and it felt like I was watching a video game. It seemed like much of the film was staged to make it more "console-friendly". *does a quick internet search* Yup, they released an inconsistent quality video game on multiple formats which was rushed to coincide with the release of the film.

The entire pace of this film was slow; one of my flatmates left 15 minutes into it, and the other fell asleep several times during. Jamie Foxx really never stood a chance, and I have no idea why he took this role. His character was dressed in such a way that nobody took him seriously, and as a villain, Electro was barely participated. There were pretty much no real villains in this film. A couple of bad guys, who never really lasted long enough for a real fight. This was just a teen drama.

Huh. A teen drama. This movie is in the wrong category. If you enjoy needless drama, and want a film that tries to explore the characters, and back story further, then this may interest you. But if you wanted to see Spider-Man fighting bad guys, then you will be sorely disappointed.

Score: 8.0
Product reviews for listing 5743: Any Given Sunday
Directed by Oliver Stone

Life is a contact sport and football is life when three-time academy award-winning filmmaker Oliver Stone and a dynamic acting ensemble explore the fortunes of the Miami Sharks in Any Given Sunday. At the 50-year line of this gridiron cosmos is Al Pacino as Tony D'Amato, the embattled Sharks coach facing a full-on blitz of team strife plus a new, marketing-savvy sharks owner (Cameron Diaz) who's sure Tony is way too old school. An ... more...