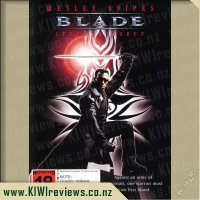 He has sworn to defend humanity yet he is not entirely human. He possesses the superhuman strength of vampires yet he fights for their annihilation. He is Blade, an immortal warrior born with powers greater than any man or vampire, and he has just one mission: to destroy an army of vampires preying on the human race. Blade is out to eliminate the blood thirsty killers for good, but first he must eliminate their omnipotent overlord, Deacon Frost. Using his awesome powers and razor sharp weaponry, Blade steps out for the night of his life. Prepare for a blood chilling thriller you wouldn't dare imagine.

I quite enjoyed this film. It had an interesting perspective, that seemed to focus more on the antagonists side of the plot. In fact Blade's part in this film was incredibly clinical. If it just followed his exploits, the film probably would have been a third of the length. But it was good to have a fully idea of the inner workings of the villains.

They have an opportunistic stance on the transmission of vampirism, with it not being an inevitable things, but curable in some cases. As with most vampire films,the plot requires a lot of legends that someone is trying to make come to fruition, but for me there was not enough emphasis on the legend, and how it was meant to work. By the time it got to the climax of the film, the process at which things occurred wasn't explained, so it was confusing.

The computer generated effects haven't aged very well. But it is still an enjoyable watch. Lots of action, lots of fancy weaponry, and a straightforward plot (from Blades perspective) A few curveballs are thrown at you to keep your interest, with a big "WHAT?!" moment towards the end. A fun movie on all accounts. Definitely a must-watch for any vampire fans (proper vampires, not Twilight vampires).