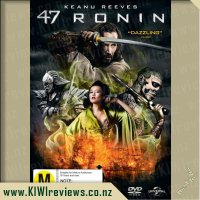 Keanu Reeves makes an explosive return to action-adventure in 47 Ronin! After a treacherous warlord kills their master and banishes their kind, 47 leaderless samurai vow to seek vengeance and restore honour to their people.

Driven from their homes and dispersed across the land, this band of Ronin must seek the help of Kai (Reeves) - a half-breed they once rejected - as they fight their way across a savage world of mythic beasts, shape-shifting witchcraft and wondrous terrors.

As this exiled, enslaved outcast becomes their most deadly weapon, he will transform into the hero who inspires this band of outnumbered rebels to seize eternity.

Visually this movie is amazing. The scenes with the witches coat dancing and twirling thru the air is beautiful, the way her hair has a life of its own is fantastic to watch. The amazing animals especially the Unicorn at the beginning - I just wanted them to pause long enough for me to take the creature in or the end with the Dragon I did not want the fight to end just watching it was mesmerizing. One of the best special effects movie I have seen in a very long time.

The story was great until it said 'based on factual events' kinda made you think what the? I didn't realise that Unicorns actually walked around Japans hills or that Witches could turn into Dragons. It was still very much watchable and held your attention. The acting especially from the Japanese actors was fantastic, although I felt Keanu let it down a bit, just didn't feel he was quite the fit for the character.

47 Ronins tells the revenge story of Samuris who want justice after there masters was wrongly accused of a crime. They realise that this act is a suicide mission but yet with honour they carry out the task. I am not sure how much of this movie is true, as the 47 Ronins did exists and how much is fabricated for the story. To be honest I had never heard of them until watching the movie and then my husband filled in the gaps. Its a lovely story of honour. Well worth watching if you like adventure and fighting.

This was a much more "supernatural" movie than I expected. When demons were mentioned, I was expecting more of a metaphorical demon. But this soon enough became a film of computer generated enemies, and was less pleasing than it could have been. Seeing Samurai take down real animals, would have been far more impressive than seeing them defeat mythical creatures.

This was yet another film that will write whatever point they can into a script to have a caucasian actor as the lead in a film regarding traditional asian culture. I didn't really look at the trailers, dvd covers, or actors involved before watching this film, and I honestly let out an audible groan when I saw Keanu Reeves playing the lead.

With witches, alien races, spirits, and mythical creatures, this "based on a true event" film is as far away from the truth as it can really be. But it did have some good points to it. The fight scenes were exciting, the predictable plot-lines weren't overly obvious (they were just long enough that you figured it out before the reveal), and it didn't end in the expected way; it followed the traditions as they should.

It really was an odd film. It could have been much more appealing if they had chosen a better actor than Keanu Reeves, in my opinion, but it was certainly entertaining, and visual quality was great.

Things aren't going well for John McClane: his marriage is breaking up, he's been suspended from the force and now the brother of Hans Gruber, the German terrorist he threw off a building a few years back, is threatening to blow up a school if McClane doesn't run around the city solving his demeaning and dangerous puzzles.

With the help of Zeus, a Harlem electrician, McClane discovers Gruber's plot to distract the NYPD while he clears the federal bank of billions of dollars of gold.