ProdID: 5675 - Guardians of the Galaxy
Directed by James Gunn 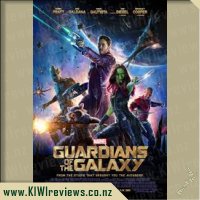 Disclosure StatementFULL DISCLOSURE: A number of units of this product have, at some time, been supplied to KIWIreviews by the company for the purposes of unbiased, independent reviews. No fee was accepted by KIWIreviews or the reviewers themselves - these are genuine, unpaid consumer reviews.
Available:
9th August 2014

Guardians of the Galaxy product reviews

After stealing a mysterious orb, American pilot/outlaw hero Peter Quill is hunted down and thrown into an inter-galactic prison. In order to secure his freedom, Quill reluctantly joins forces with alien bandits Drax, Gamora, Rocket and Groot to form an alliance of misfits known as the Guardians of the Galaxy, and with the all-powerful villain Ronan hunting the orb, the fate of the universe is in their hands.

So after reading the novel for the Guardians of the Galaxy and getting the background for the movie I was eagerly waiting to see it on the big screen. Santa Claus brought my husband a copy of the DVD and after a hectic Christmas we finally got to sit down and watch last night.

The junior novel I had just read followed very closely with the movie, until the end of the book where it completely changed - also where the book ended the movie carried on. So I was a little confused as to what was going to happen.

I have to admit this didn't grip me as much as the book did and I found I was getting bored quite a bit. It just didn't have that attention factor I was hoping for. The acting also left me kinda flat. I did enjoy seeing Groot and Rocket in 'real life' and they did not disappoint, but, I did not find Peter Quill's character that convincing and personally think he was not the right man for the job.

My husband wasn't overly happy with it either. He enjoyed it but the excitement which usually follows was not there and where as we usually discuss things after a movie the conversation died after talking about Groot and Drax.

I always love seeing the cameos by Stan Lee and usually the Marvel movies end with a scene from an upcoming movie but this had a 5 second clip which was just 'oh is that it' nothing to do with nothing really. If you love your Marvel movies then you probably will enjoy this but be warned it does lag quite a bit.

This film is definitely up in the top releases of 2014. Kudos to Marvel for pulling off another Avengers-style film, without the need for origin stories of each of the characters being covered in multiple prior theatrical releases. Pulling together and introducing these five characters would have been no simple feat, but it is done well, and uses humour generously within their interactions.

I was very cautious with my excitement leading up to this movie, with the knowledge that it involved a CGI Machine gun-wielding Raccoon, and a talking tree; these elements would decide the overall quality of the film, whether amazing or horrible. But I loved it. I would gladly watch it again, and if there was a prequel that only followed the exploits of Rocket Raccoon and his tree friend, Groot, I would gladly part with my money.

I did thoroughly enjoy this film. It had action and comedy, but also had an unofficial, rebellious, and amateur feel to it, which gave it a different atmosphere, and separates it from such ventures as the Avengers. My only real qualm with this film is the final battle with the villain; with so much of a lead up, I felt that the ending was rather anticlimactic. But I guess that there are limited possibilities left when you overpower the villain.

3D adds very little to the film, but that being said, it doesn't need it. If anything, it actually takes away from the battles, as the fast moving objects become more difficult to follow. I'd definitely watch it again, in 2D, that Raccoon was hilarious.

I had no idea what to expect from this movie as I hadn't really followed the comics as a kid and I am so very grateful that I didn't or I would have spent the whole time wondering why things weren't exactly the same as the books/comics.

The beginning half an hour I was sitting there wondering why the movie would be called Gardians of the Galaxy when they were all convicts but still got into the movie. The 3D was great, felt like I was right there and that the characters would step right onto my lap, there was also the feeling of needing to duck to get out the way of falling ships, rocks or people but it was the uncomfortable feeling of the 3D glasses that stopped me from ducking.

I grew up with a lot of the music used so I was singing along in my head and thinking that it was great, a bit out of place in some situations but still enjoying it. I did kind of feel old when they showed the Walkman as I had one when younger.

Not knowing the story didn't stop me from enjoying it, most stories follow a set series of events and the good guys always win, even when it is hard to identify exactly who the good guys are.

I wouldn't recommend this movie for kids (my 6 year old asked if he was allowed to come and see it with me) but I would recommend to anyone who wants to see fantastic special effects and a good movie.

The first trailer that I saw for Guardians of the Galaxy it was a must watch, at some point, for me. The second trailer wasn't as good but I was still eager to watch it and was really happy to get a ticket to the preview.

I knew the basic make-up of the team and knew what they all looked like but I didn't know any of the history of any of the characters. We start on Earth in 1988 and get a short history of Quill and where he comes from, skip forward and he is an outlaw in space, and steals a mysterious orb. What sets off is a chain of events that teams up Quill with Drax (who's family was murdered), Rocket (a science experiment), Groot (a living tree being) and Gamora (a traitor to Ronan). The acting was really well done, though I did think it stupid credit Vin Diesel at the start, as there is so little that he has to do.

The plot is well done, you can be a newbie to the universe and still learn enough to not be left behind. There was only one gratuitous groin shot and one butt shot, which I find a good plus, Gamora and her sister were kick ass chicks that weren't lorded over for their looks (though of course, they had to look "hot"). I loved the soundtrack, they were all classic 70's hits and I knew all the songs. I enjoyed the movie as a good old action flick and while there were some corny jokes, I'd really enjoy watching a second movie with these characters.

My husband wants to watch this when it comes out on DVD and I'll be more than happy to borrow it and watch it. And as always, stick around till the end of the credits.

This movie certainly SEEMS to have all the ingredients for a blockbuster flick... and while I enjoyed it a lot, there were a few moments that threw me. It comes across as a light-hearted action movie suitable for kids, but some of the language in it struck me as inappropriate for a "family" movie and I wouldn't take my youngest along to see it... and he's seen all of The Avenger's series of movies without issues!

Speaking of which... yes... those of you who haven't read all of the Marvel Universe of stories, but have followed the movies, will notice that two characters make an appearance that tie this in firmly with The Avengers timeline. I won't say who they are, or where they appear, but if you have a good memory you'll know when you see them.

The lead character, the self-proclaimed "Star Lord" - is cheesy, irreverent, borderline intolerable... but ultimately the story *is* all about him. Some hints as to his identity and importance are given right at the start, but you don't really know what the fuss is about, and what makes him so special, until the very end.

I found it difficult to pick a "favourite character" - there were plenty I didn't like for one reason or another - but the closing clip helped me trim the list down to one - Groot. Apparently voiced by Vin Diesel, the chap only had four words, one of which he only got to say once. Still, of them all he showed the widest range - protective, loyal, deadly, versatile... and ultimately nigh-on indestructable.

Overall, while this movie wasn't as enjoyable for me as I hoped - not helped by arriving at the theatre late and getting seats down the front so kept getting sidetracked by a sore neck - I can see how this movie will appeal to a wide range of tastes across any age group. However I wouldn't personally recommend it be seen by under-15's.