« Are We Officially Dating? review 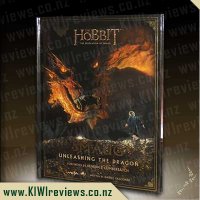 How did the filmmakers manage to take the Dragon that has lived in millions of readers' imaginations and turn him into a totally unique and unforgettable living, breathing character?The answer can be found in Smaug: Unleashing the Dragon.

Packed with stunning, exclusive new images, it reveals how he grew out of countless fantastical concept designs into the beast that is unleashed in awesome digital glory.Compiled by the Academy Award-winning Weta Digital and Weta Workshop teams, who provide fascinating insights telling the story of the Dragon's creation, this is the perfect companion for every fan who was blown away by Smaug, the Magnificent!

You're All My Favourites
Rating: 10.0

The Raven and Other Tales
Rating: 10.0

The Garden of Lost and Found
Rating: 9.3

This was quite an eye-opener for me, in terms of the level of effort, and the size of the teams that are all working on completely separate things that are all still put together to form what is Smaug, the Legendary Dragon from the Hobbit (so legendary that it gets capitalisation!).

This book is an accumulation of quotes from what looks like a series of interviews with all of the Weta Workshop staff that were involved in the making of Smaug, and walks us through step by step, Smaugs creation; from concept art, to clay sculptures, to 3D digital models, and then from colouring, to lighting, to shading. No stone was left unturned.

For me, while I enjoyed learning about the whole process (and I now have a greater appreciation of the amount of work that goes into computer generated creatures) the technical side of it, was a little dull, seeing as I know nothing about how they do what they do. The part of the book that I really enjoyed the most, was the concept art.

Smaug came in many shapes and sizes, looking comparable to alligators, snakes, and even chickens. And all beautifully drawn. Seeing how such things as the size and placement of the eye, being critically debated, it was amazing to be able to see the progression.

I enjoyed this book purely for its art, so the price was a bit steep in my opinion. But for someone that has a passion for the animation and 3D digital modelling, this book would be a great source of inspiration.

In the futuristic world of James Cameron's Avatar a young man named Jake becomes part of an exploration team on the planet Pandora, inhabited by the exotic Na'vi.

Scientists have created an avatar - a body that looks like a Na'vi but is operated by a human's consciousness. When in his avatar body, Jake finds himself drawn to the planet's way of life. But before the Na'vi will accept him as one of their own, he has to pass a ... more...