Journey to a Hanging review 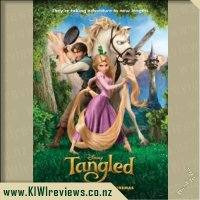 After receiving the healing powers from a magical flower, the baby Princess Rapunzel is kidnapped from the palace in the middle of the night by Mother Gothel. Mother Gothel knows that the flower's magical powers are now growing within the golden hair of Rapunzel, and to stay young, she must lock Rapunzel in her hidden tower.

Rapunzel is now a teenager and her hair has grown to a length of 70 feet. The beautiful Rapunzel has been in the tower her entire life, and she is curious about the outside world.

One day, the bandit Flynn Ryder scales the tower and is taken captive by Rapunzel. Rapunzel strikes a deal with the charming thief to act as her guide to travel to the place where the floating lights come from that she has seen every year on her birthday. Rapunzel is about to have the most exciting and magnificent journey of her life.

When I saw the trailer for this I thought it looked wonderful and like a lot of fun, my only disappointment was that they didn't just stick with the title Rapunzel (cause they figured boys wouldn't want to go to a movie with a girls name, which is just plain stupid!) but with the line of "you should know this is the strangest thing I've ever done" whilst Flynn fights with Maximus the horse.... that had me wanting to see this movie. The cast is a great one and I particularly like Zachary Levi as he has done a lot of help raising money for a cause very close to my heart.

I love how in this version of the well know fairy tale, Rapunzel isn't stuck waiting in the tower for her prince to come and save her, that when someone finally enters her home she sticks up for herself, makes a deal and ends up finally out of the tower and on the journey of a lifetime. If you can spot them there are a few hints to other movies, such as a cameo by Pinocchio and Pumba, but you have to have a sharp eye for that. The songs are lots of fun and add well to the film and the animation is gorgeous. I love this movie as does my son and daughters.

If you can get past the freakishly big eyes Tangled has to be the best Disney Princess movie. It has everything, romance, adventure, laughter, bad guys, good guys and singing. The songs are really fun like my favourite 'Mumma Knows Best' or 'I've Got a Dream' and you will find yourself singing away to them.

The story is basically Rupunzel in a nut shell. Kidnapped when she was younger, locked in a tower with her awesome hair that possess hidden magic. Along comes Flynn Ryder a criminal who of course becomes the hero and love interest - its fantastic.

The girls love this movie and watch all the time. Actually I also really enjoy it. From the very first time we saw it we fell for it. Its one of those movies you can watch numerous times and not get tired of. Mainly because of the humour but also because of the loveable creatures. Maximus has got to be my favourite. A horse with attitude who does some great facial expressions and then there is her cute pet Pascal the Chamelon. They offer so much comic relief to the movie so it is never too heavy and doesn't get too dull for the children.

Oh, I forgot there is also Flynn's smoulder, definitly worth the mention as you will go weak at the knees for him. Great movie that the whole family will definitly enjoy.

The pivotal fourth novel in the seven-part tale of Harry Potter's training as a wizard and his coming of age. Harry wants to get away from the pernicious Dursleys and go to the International Quidditch Cup with Hermione, Ron, and the Weasleys. He wants to dream about Cho Chang, his crush (and maybe do more than dream).

He wants to find out about the mysterious event that's supposed to take place at Hogwarts this year, an event ... more...