Doctor Who: Season One review

ProdID: 5662 - Orange is the New Black: Season One
Type of Show: Drama 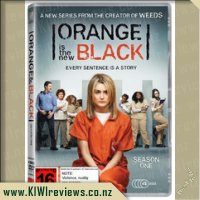 Orange is the New Black: Season One product reviews

Based on Piper Kerman's best-selling memoir, Orange Is the New Black follows Brooklynite Piper Chapman, (Golden Globe nominee Taylor Schilling - Argo), whose decade-old relationship with drug-runner Alex (Laura Prepon - That 70's Show) results in her arrest and year-long detention in a federal penitentiary. To pay her debt to society, Piper must trade her comfortable New York life with fiance Larry (Jason Biggs - Anything Else) for an orange prison jumpsuit and a baffling prison culture where she is forced to question everything she believes about herself and the world at large. As she struggles to adjust to her new reality, she finds unexpected laughter, tears, conflict and camaraderie amidst an eccentric and outspoken group of inmates.

I missed a few episodes but this is the type of thing I normally watch and enjoy. I liked that the stories were relevant and moving, you got told enough that you knew why the person was in jail but not the whole story all at once.

The characters are believable, you feel sorry for them and then there are some of the prison officers that you just want to kick in the balls due to them taking such advantage of their positions in the prison and the lengths they go to so that their activities aren't discovered. The topics are not for sensitive people, one character can't decide if she wants to be with her boyfriend or if she wants her girlfriend back in her life, some of the guards are having it off with the prisoners and that brings a lot of complications.

I stayed up late most nights and couldn't believe the cliffhanger of the final episode, I sat there thinking that I have to watch the next episode to see what happens to be told that that was the last episode and I need to wait to see season 2 (which is not yet on DVD and has already been on Sky).

I would recommend this to anyone who can handle the tough storylines and doesn't mind some bad language and adult themes. I can't wait for the next series

When I was a young girl and Star Trek Voyager was on, Kate Mulgrew was my idol, when I saw Orange is the new Black season two coming on in New Zealand I just had to watch season one (and now I'll have to watch season two somehow).

Piper surrenders herself to prison as advised by her lawyer (her future father in law) to try and avoid a longer sentence, through flashbacks throughout the series we see how she came to where she is. One of the things that I really enjoyed about this series is that we don't get told each characters story in one fowl swoop, we get snippets of each character spread out, such as Red, we got to the end of the first season and I still don't know why she's in jail. All the characters have different reasons behind their incarceration from murder to assault and so on, some we still don't know what they did to earn their jail time.

The characters are all so varied and the great thing is that, whilst Piper is meant to be the main character, all the characters get a great amount of screen time and each character is built upon really well. The acting is brilliant, so believable and you're not left thinking about any other role that they may have done. The storyline is great, not only giving history to the characters, but making us really feel for some of them and really start to want to know more and more about them.

I loved this, staying up till after 11pm just so I could watch one more episode and then season finale...!!!! That had me really wishing that I had recorded season two when it aired on TV. This is a show I will continue watching, without a doubt.

Raise The Oozy Scab:
Jimmy and Cindy have to team up for a science project. They're going to search for the sunken treasure ship, the Oozy Scab, in a submarine Jimmy's built. And just like on land, when you put these two together, you're ... more...