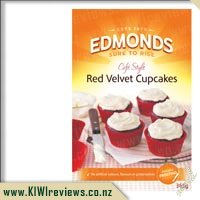 Price:
$5.99
Available:
At all good supermarkets

My two children are 9 years and 12 years old and they decided that they were going to make the Edmonds Red Velvet Cupcakes on their own without the help from Mum (Me). They both have not done a lot of cooking, so I thought this would be a good introduction to cooking. So I bravely left them to it.

They found the instructions were very clear and easy to follow. No tricky measurements or items that needed to be weighed. The measurements were given in two options ie. Milk 125ml or 1/2 Cup. Plus there was not a lot of ingredients you needed to add. It was just butter, eggs and Milk. The cupcake cups were provided so they just spooned the mixture straight into those and popped into the oven. They did not come out once to ask for help.

Once the cupcakes were out of the oven there was a Frosting to be made which all you needed to add was butter and milk, again very easy to follow the instructions and not many ingredients.

The taste test is where it is all about and I found these cupcakes were moist and delicious. I don't like my food to be too sweet and these seem to be a perfect balance. The frosting was a beautiful addition, soft and creamy and again not too sweet.

My favourite part of this product is that it was easy for my children to make, plus it was delicious to eat and kept our school lunch boxes full. Plus because they provided the cupcake cups the clean up was easy and no fuss. Only one bowl and a mixing spoon were required. I would definitely recommend this product for not only the taste value but for ease of making. I'll happily let my kids make this by themselves whenever they wanted.

In todays super busy society where there just never seems to be enough time to do anything ever, it is a reality that sometimes we have to grab for the products that are easy to use, less time consuming and just basically mean making our lives easier, especially if we have children who need school lunches, or perhaps we have to put on regular morning tea shouts etc. It is sad that home baking for many is nothing like the 'good ole days' where everything was hand made from scratch, but times change and we have to go with them.

Edmonds offer a selection of boxed baking products. We tend to only purchase them when they are on special, as I like to have them readily available, especially during the off season when money is tight, and treats are minimal. They have been a savior during many off season actually, with all 3 of my kids birthdays being in the off season, and I have had to resort to one of these box mixes to make birthday cakes. They have also seen many a school lunch with a sandwich and piece of fruit. It is not much, but the added baking item always makes the lunch box look so much more homely.

My kids love red velvet cupcakes, so they always choose this one when on special. We have chickens, so eggs are not a bother, and as you only need to add a little butter and milk with the eggs, we generally have everything needed on hand at any given moment, so these can be made at any time. They are easy to make, and they freeze well once made too. My kids love the flavour, and are always happy with them. I always seem to over cook them

I don't know why, lol, cupcakes are something I struggle with often haha

Anways, an easy to make cupcake that kids seem to enjoy. Can be to dry if you're not paying attention, but do not require much effort to make, and although not traditional home baking, definitely the next best thing!

Red velvet cupcakes are often requested by my partner and his friends for sports gatherings at our house. Usually, I make these from scratch but to be truthful they have a lot of steps involved and so can be rather time-consuming. While out shopping for ingredients for my requested red velvet cupcakes to make for the following day I happened to stumble across the Edmonds red velvet cupcake mix, I decided to buy a box and 'cheat'.

As with other packet mixes, I have tried in the past these were very simple to make with just a few easy steps. Mix together the cupcake mix in a bowl with butter, eggs and milk, using an electric mixer for 2 and a half minutes (usually, I tend to just mix with a wooden spoon). I put the red cupcake cases that came in the box into a muffin tray and then used my retractable ice cream scoop to put the mixture evenly into the cases and then popped them into the preheated oven for around 20minutes at 180 degrees.

While I waited for the cupcakes to cook I decided to make the icing, which the packet claimed to be Cream Cheese Frosting. This was super easy to prepare by placing in a small bowl the frosting mix, milk and butter and mixing with a hand beater for 3 minutes until well mixed, thick and fluffy. At this stage I had to sample the icing which left me a tad disappointed as it was nothing like the cream cheese icing I usually make, it was sickly sweet and there didn't seem like enough to top 12 cupcakes with!

After the cupcakes cooled, I iced them with just a smidgen of icing compared to what I'd usually put on a cupcake. Then came the taste test straight away it led to disappointment as the cake stuck to the wrapper and broke apart as I peeled it off. The cake itself was very dry and just tasted like a standard vanilla cupcake nothing special. My guests were far from impressed as this wasn't the Red Velvet cupcakes they were expecting and told me I should stick to my tried and true from now on, and that's exactly what I will be doing.

my family love Red Velvet Cupcakes but I find that a lot of food colouring needs to be added to get the colour so we were keen to give these a try. The instructions were so basic, mix the cupcake mix, butter, eggs and milk in small mixing bowl and beat on low speed for 30 seconds then increase to medium for about 2 minutes. I didn't have a hand held mixer on hand but used a whisk and this was fine just took a bit longer to mix than it would with the hand mixer. I baked mine for around 21-22 minutes my oven runs very hot,then I transferred to a wire rack while they cooled completely.

Once cooled I made up the Cream Cheese Frosting as per instructions. Frosting mix with butter and milk in small bowl and mix on low for 30 seconds and then increase speed for 3 minutes once again I did not have a hand mixer so mixed by hand mixture was a bit runny so I had to add more icing sugar I guess if I had a mixer it would have thickened up a lot more. but I gave it a taste test and it tasted ok very sweet but I did have to ad a lot more icing sugar to get to a spreadable consistency.

And the results:
We found that the cupcake its self had a nice plain flavor nothing special kids just thought it was vanilla with red food colouring added. the cupcakes fell apart when removed from the wrapper and were a bit dry but could have been my oven drying them out. Overall a easy treat for the kids to whip out without much help but I would only stick to eating these as a last resort I would not use them for special occasions.

I love Red Velvet Cupcakes but find making them such a pain. When I found this on special I jumped at the opportunity to try them. The instructions were so basic, mix the cupcake mix, butter, eggs and milk in small mixing bowl and beat on low speed for 30 seconds then increase to medium for about 2 minutes.

I had cupcake cases already and so used these. After baking for 23 minutes (half way between 20 and 25 minutes) took out of the oven to check on them but they were still not cooked so put on for further 5 minutes and still were not fully cooked so put back in for another 5 minutes. I let them cool then transferred to a wire rack while they cooled completely.

In the mean time made the Cream Cheese Frosting as per instructions. Frosting mix with butter and milk in small bowl and mix on ow for 30 seconds and then increase speed for 30 minutes. I did not try this as figured it would be yummy and just trusted it. I placed the icing on the cup cakes and then left for a little while to harden.

First of all the cupcake stuck to my cupcake cases and so fell apart. The icing tasted really lemony and was not that fabulous and also did not set very well. The cup cake itself was ok but overall the family were not blown away by them and so will not buy these again in the future.

Located on Victoria Avenue, between Maria Place and Ridgeway Street, near the river in Wanganui.

Serving Chinese and European takeaways, or dine-in in our restaurant.