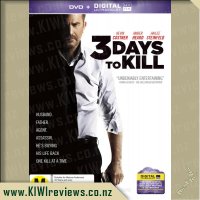 In this heart pounding action-thriller, Kevin Costner is a dangerous international spy, who is determined to give up his high stakes life to finally build a closer relationship with his estranged wife and daughter, whom he's previously kept at arm's length to keep them out of danger.

But first, he must complete one last mission - even if it means juggling the two toughest assignments yet: hunting down the world's most ruthless terrorist and looking after his teenage daughter for the first time in ten years, while his wife is out of town.

Right from the beginning there was action in this movie. I am very busy these days with a young family and I don't have a huge amount of time to watch movies. If I am not hooked straight away, I am likely to put it aside in preference for a movie that grabs me. With this movie, I was hooked straight away so this was a very positive start. The music used reminded me of any great action movie. The rough looking action hero with family issues, blood, guns, explosions, goodies and baddies and a chase scene - all combine to make the perfect beginning.

The squatters added some joviality to Ethan's (Kevin Costner) home in Paris. He is a serious man with many issues and the joy and innocence on the faces of the squatters gave a nice contrast.

There was a bit of humour in the movie as Ethan interacted with his prisoners to get advice about his teenage daughter, while holding them, tied up with duct tape, to interrogate them. I thought it was quite funny that serious business was mixed up with his personal life. His phone kept ringing with his daughter's ring tone when he was about to do something serious. The work/life balance had been missing for him for too many years and he was trying to get it back. This is something that most of us parents can relate to as we attempt to get that balance right for everyone involved. I enjoyed watching the relationship between Ethan and his daughter unfold and for Ethan to develop as a father. I liked the way the purple push bike was used in various parts of the relationship between Ethan and his daughter. It finally brought them closer together and she is taught by him to ride it.

Amber Heard's character, Vivi, has many different looks throughout the movie. Many different wigs, styles of clothing and makeup are used. The red lipstick and blonde hair stand out amongst all the other colours. Personally, I wasn't that fussed on her character and seemed to get a bit annoyed by her.

My husband found that the movie was a bit slow and disjointed. Although I did mostly enjoy it, I did find that I lost what was happening a bit. I felt that the storyline was a bit strained and slow at times. I know that Ethan's health problems were a big part of the movie but I think that they slowed things down a lot and we missed out on some good action because of it. It was good to see that towards the end, the tempo amped up a bit with the characters resuming the action which was started at the beginning of the movie.

We ended up watching the movie twice as we weren't 100% convinced that we liked the whole movie the first time round. I must say that the second viewing was much more enjoyable and didn't seem as strained as the first viewing.

Score: 10.0
Product reviews for listing 3968: I Give It a Year
Directed by Dan Mazer

Since they met at a party, ambitious high-flyer Nat and struggling novelist Josh have been deliriously happy despite their differences. Josh is a thinker, Nat's a doer..but the spark between them is undeniable. Their wedding is a dream come true, but family, friends and even the minister who marries them aren't convinced that they can last.

Josh's ex-girlfriend, Chloe, and Nat's handsome American client Guy, could offer attractive alternatives. With their first anniversary approaching, neither wants to be the first to give up, but will they make it?