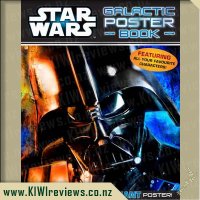 Your favourite Star Wars characters are flying out of this book and onto your wall. Each tear-out poster comes with a character profile. Learn more about each of the characters and read about the Galactic Empire versus the Jedi Council and Rebel Alliance. There are heaps of cool Star Wars stickers for you to enjoy as well.

Asterix and the Chariot Race
Rating: 9.3

We are a Star Wars household. Well, to be fair, we just really like sci-fi fantasy stuff. But my husband is enough into Star Wars that he has read the novels and watched the movies over and over. He will happily argue the Han Shot First point, you get the picture. So there was really not much hope for our kids that they would escape the draw of Jedi Knights and Sith Lords.

We have been watching the Clone Wars cartoon and the Lego Star Wars series as well. So this book made a good champion for those series for any kid who is interested in learning a bit more about their favourite characters. Having seen all 6 movies, I found this book good. It covered all the characters that I know and love, or love to hate. I was able to learn a bit more about how the characters all hang together as well.

My daughter was really interested in the character descriptions and the pictures and it was good that the pages were perforated as well so we could have A4 sized posters if we wanted. There was also a bigger poster in the back of the book. The only thing I thought they could have done, was have the description of the character on the back of the poster for that character. Because if you did rip the poster out, you lost the description for the next poster.

On the back of the book there is also a Wookie Mask which looks pretty neat, though again you would have to be committed to rip the book up and actually using it for posters and the mask, to want to destroy the back cover. I think my parents taught me to respect books so well, the idea of cutting it is a bit difficult. Though my kid would have no issue with it. And to be fair, at $12 I shouldn't be too heart broken if she did use it as intended.

The graphics and composition of the poster images and associated images is engaging and action-packed. The quality of the paper is glossy and thick. I think for what it is, and the thought that has gone into making the pages hardy, it's pretty cool.

Star Wars is a huge hit in my family everyone including my 3 year old niece love it! When the chance to review the poster book came up was keen to check it out. Between all of us I knew none of the posters would be wasted as everyone has their own favourite.

The book contains 11 A4 sized posters which rip out of the book. Each of these posters come with a character profile with lots of interesting information about them. Reading through the character profiles enlightened me in lots of wee facts I didn't know. It also tells you what movies they appeared in. Each poster contains everyone's favourites characters. As well as the 11 A4 posters there is also a giant pull out poster at the back of the book. On the back cover you can also cut out your very own Wookiee mask.

With a lot of pull out poster books I find them hard to get out and you often end up tearing the poster as you try and get them out. This is not the case with this book each poster pulled out cleaning not a ripped poster in sight! This poster book is a must have for any die hard Star Wars fan.

it was deep mid-winter and all through the village preparations were being made to farewell the old year and greet the new. For the first time ever, the seventh little sister, Ururangi, was big enough to make her own celebration kite.

But when the seven sisters take the finished kites to fly them, the east wind whips them all away into the sky ... where they now appear as the stars of Matariki to welcome the Maori new ... more...