« Geronimo Stilton - The Hunt for the Golden Book review 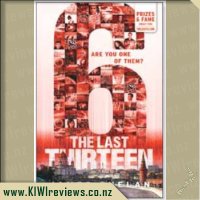 As Sam is drawn into an age-old battle for the Dreamscape. Even more confusing is that the next Dreamer seems to know as much as Sam about the importance of her dreams and the search for the Gears.

From the Kremlin in Moscow to the wilds of Siberia, Sam is involved in a race-within-the-race with an old adversary with a sinister way of staying one step ahead. The more Sam and his friends dream, the less they will remember.

Unlike most books in a series, the author is, in this one, trying to keep things fresh and new by mixing up the storyline in each book. In most of the books, the dreamers have been found the same way, Sam dreams of them, finds them, explains the situation of the hunt for the dream gate to them, and then the dreamer dreams of where to find the next part of the complex Bakhu machine, built by Leornardo Da Vinci as a map to the dream gate. However, in this book, the dreamer in question already knows about the hunt, and the book also introduces a new faction of opponents, known as the Hypnos.

I liked this twist very much, so far I have seen multiple ways in which the author has attempted to capture and preserve the attention of the readers, with which he has succeeded. I have noticed that a new following trend has arisen in the stories, in which Sam is forced to split off from the aid of the Academy and travel long distances on his own, encountering and sometimes barely escaping, several threats. I am also confused by what appears to be something of an alliance between Sam and the mysterious nemesis known as Solaris, and it makes me continuously question just WHO Solaris really is!

Now that the series has crossed it's midpoint, the overall story is starting to warm up, falling into an entire ocean of secrets, resolved and then replaced, with the storyline becoming ever more complex as new characters and, in the case of this book, enemy factions, are entered, all the while the author taunts the readers, coaxing them on with a long series of cliffhangers, some of which ending in impossible situations, I cannot begin to imagine just how intense the final book will be, as it is a book where long-preserved mysteries must be revealed, I look forward to that event with growing anxiety and anticipation.

This series of books has had so many twists and turns in the plot it is really incredible, you are constantly questioning and wondering while you read which is really great for people who like to be kept guessing. In this edition two new groups have joined the race with the Hypnos an evil group who have gone to some unbelievable means to get ahead in the dream race and the Nyx who are the victims of the Hypnos and have had their dreams stolen.

Sam discovers a new ally in the Nyx just in the nick of time as he was about to suffer the same fate as other Nyx survivors. Quite gripping as you wonder what is going to become of Sam and his new friend. His fate still lays in wait as the book has yet again left us on a gripping cliff hanger until next time. Sam has become a pretty strong dreamer so I am sure he will yet again come out on top but the book has still instilled fear that perhaps Sam will be defeated.

Still plenty of action in this book we see more enemies die and we see more of the dreamers have to fight to get ahead, the action is non stop and very exciting. Yet again bakhu gears have been lost to the enemy so now we wait and see how Sam will fight to get them back, with only 5 more books to go the end is in sight yet they still seem so far behind in the rest so I am pretty sure the next five books in the series are going to be pretty fast paced.

I have a few niggling questions at the end of reading this book, I am wondering why twice now they have gone back to the professor being a bit conspicious in some of Sam's dreams, it seems very unlikely but it still leaves me questioning whether he can indeed be trusted. I will have to wait and see if any of my suspicions are accurate but just a suspicion that there is more to the Professor than meets the eye. And as we have learnt with this series no one can be trusted really with people turning all over the place.

Also another thing I loved with this book is the way Eva just continues to grow and strengthen she hasn't had one of the dreams of the last thirteen yet but I wonder if they perhaps are saving the best for last as she has become so strong and useful in the race. With some of her dreams already unlocking clues and new mysteries that may prove to be of use.

Still in love with the series and can't wait to get my hands on the next book!

Brimming with honesty, heart and Jenn's patented sense of humour, it features top 10 lists, photos, screenshots, social media posts and never-before-posted stories chronicling Jenn's journey from an anxious middle-schooler just trying to fit in, to a YouTube sensation unafraid to stand out.