The Encyclopedia of Immaturity Volume 2 review 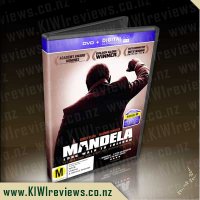 He stands today as one of the greatest leaders of our time: a towering figure of courage who transformed his country and the world with his unwavering fight against racial oppression.

Having recently read a book about Nelson Mandela and having a little knowledge from my high school year, I have developed an interest in his life and the events surrounding it. I was very keen to watch the movie and I am so glad that I did.

I think that my eyes were opened more than ever to the horrible things that happened to the people in South Africa. It is hard to believe that this was still happening in my lifetime and that it wasn't some sad events in the long past history. It was so recent. I think that the movie was very powerful because it gave faces to the goings on and a visual insight to the segregation of the blacks and whites.

The actors, scenery, music and clothing all came together to make the movie feel real. It gave the notion that we were watching real life events unfold rather than a movie. The tiny details were all taken care of, right down to the flakey paint on Mandela's cell window and bars. In addition to all the everyday clothing that the actors wore, it was nice to see some of the traditional clothing for the wedding of the Mandelas. The actor playing Mandela, Idris Elba, did a great job and if I hadn't seen other images of Mandela, I would have gone about life believing that he was the real Mandela. As Mandela grew older, the use of makeup was done well to age him little by little. The inclusion of real photos in black and white was well done in the movie and worked well with the dramatised version of events. Music was also used to good effect during the course of the movie.

Watching this movie, I had a similar reaction to movies I have seen about the oppression of Nazi Germany. In both cases, I experienced the feeling of horror as I watched how humans can be so horrible to other humans. At least in this case, there was success when Nelson Mandela became the leader of their country. I don't think that I would have wanted to have been one of the actors playing the whites as, in most cases, the viewers would be on the side of the blacks. If you have any heart, it is so hard to see people being treat unfairly just because of the colour of their skin, even in the movies.

Flashbacks were used well in the movie to show Nelson as a young man and also flashbacks of his wife and children. It gave calm and happy moments in contrast to the loud and angry nature of prison life.

It was a rather lengthy movie but I don't think that it could be any shorter, given the information that needed to be portrayed. I think that it covered everything well, without rushing, or dragging bits out. The movie finished on a high rather than carrying on to Nelson's sickness and death. There was lovely cinematography at the end and the voice of Nelson's words to finish the movie. I would highly recommend this movie and I will watch it again.

I am fascinated by the life of Nelson Mandela and had recently been given his Biography Nelson Mandela: No Easy Walk to Freedom to review for KIWIreviews. I had missed seeing Mandela: Long Walk to Freedom when it came out at the movies but was very fortunate to be given it as a DVD to review. Although both were about the same man and were released after his death the book and the DVD were very different in so many ways.

No one could watch this DVD without being touched. When you watch this have the tissues ready. I knew it would be emotional to watch as his life was not easy but I wasn't prepared for the wailing I did while I was watching it. I am someone that does cry easily but this really touched me deeply. Most of my tears were for Mandela's daughters as it was very evident the sacrifice they had made growing up without their father while he was in prison.

Although I had read about the horrid prison conditions and the extreme violence in the streets in the book and had memories of it in the media as a child seeing on the screen made it more real. It made me reflect on what I would have done in a similar situation and question whether the Mandela's really did what was best for their own children when they were fighting for equality for their people.

This movie also shows Nelson and Winnie's less positive sides and includes the breakdown of their marriage. I was left thinking although he was a freedom fighter he wasn't a saint. I don't think the Mandela family would have liked some of the things that were about their patriarch and matriarch.

I hadn't seen any of the other movies that Idris Elba had been in and I think that this helped me to really believe he was Mandela. He did a great job portraying him from his years as a young man through to becoming president although I'm sure the make up artists helped to pull this off too. Naomie Harris also did a convincing job as Winnie Mandela.

My one disappointment with this movie was that it finished with him being elected President of South Africa and didn't continue through his later years. I felt that it was cut short and I would have happily watched it for another 30 minutes to complete his life. It did however finish on a high note rather than the with the loss of their leader.

It is a movie I will be recommending to others and one that I will watch over and over when I need to be reminding to be grateful for everything in my life.

Score: 7.5
Product reviews for listing 7873: Rebel In The Rye
Directed by Danny Strong

The Academy Award winning producers of Silver Linings Playbook, Milk, American Beauty and Sicario vividly bring to life the world of legendary writer J.D. Salinger and the experiences that shaped one of the most renowned, controversial and enigmatic authors of our time.

Set amidst the colourful backdrop of mid-20th century New York, Rebel In The Rye follows a young Salinger (Nicholas Hoult) as he struggles to find his voice, pursues a ... more...