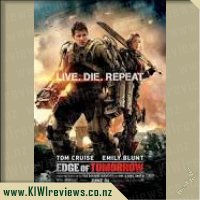 Lt. Col. Bill Cage is an officer who has never seen a day of combat when he is unceremoniously dropped into what amounts to a suicide mission. Killed within minutes, Cage now finds himself inexplicably thrown into a time loop - forcing him to live out the same brutal combat over and over, fighting and dying again - and again. But with each battle, Cage becomes able to engage the adversaries with increasing skill, alongside Special Forces warrior Rita Vrataski. And, as Cage and Rita take the fight to the aliens, each repeated encounter gets them one step closer to defeating the enemy.

This movie strikes me very much as The Matrix mashed up with Groundhog Day, and I wasn't too interested in watching this as I'm not a particular fan of Tom Cruise, but my husband has been wanting to watch it since he first saw a trailer for it and so we borrowed it on DVD.

The movie starts off a bit slow, though the reason why Cage is thrown into battle is made clear nice and quick at the start, the film is slow to start off with as Cage steps into his new role and thus we enter the Groundhog side of things, with a little bit of battle thrown into it. Things do start to pick up and there is plenty of action, gunfights and explosions going on, but I find it is also good that they throw in a bit to show how the repeated deaths is affecting Cage and how it is taken an emotional hold upon him.

Emily Blunt suited this role well, I love that the main stoic, tough and rough character is a female, Blunt plays her role well and is believable in her character. Cruise is, well, Cruise, I didn't find him anything special in this role and he does the job well, I at least didn't find him too irritating in this film. All over this was a decent movie, whilst I didn't love it I didn't hate it either and I could easily watch this again, which probably will happen as I can see my husband wanting to own this.

I used to be a Tom Cruise fan, loved his earlier movies but then he started doing some really strange movies so haven't thought to watch his recent movies but this was playing and I thought well why not?

It doesn't take long before the action starts, I am not really an action movie kind of girl but it got a lot more interesting when I realised that he was reliving the same day over and over and seeing how creative they got in killing him was rather enjoyable. I knew that at some stage they would fix what was wrong causing them to relive the same day over and over but I never really expected the ending that we got.

The special effects were great, the soldier suits were very imaginative and the ways they found to kill the people on the beach were great. If it wasn't for the alien parts then you could almost imagine being there on the beach with them. I did have the thought that it is no wonder military personnel come back from overseas with nightmares and don't really want to talk about things that they have seen or been forced to do to survive but that is not what the movie is about, just my mind going in the opposite direction.

I'm still not an action movie fan and not that convinced that Tom Cruise is going to make good movies again but I did kind of enjoy the movie more for the story line than the acting, wouldn't it be great to be able to relive our bad days and change things to get it right?

This was a surprisingly not bad movie (is a that a proper phrase? I really didn't want to use the term 'good'). Perhaps I liked the idea that I'd get to see Tom Cruise getting killed in many creative and brutal ways. It is good therapy for those that have come to dislike Cruise in these recent times.

A interesting concept, of being able to replay the last couple of days if you die. It very much reminds me of playing a game, and getting to a really hard part; you just keep dying and returning to the save point. The only real problem with the premise, is that they tried to properly explain it, and once you start trying to explain it, you inevitably get plot holes that can potentially ruin the film for you. There were a couple of those which I disliked, but in general it was an engaging film.

The enemies are incredibly matrix-like (what were those octopus things called...Sentinels!) and they have nice "erupt from the ground" moments, and make similar noises to transformers, so they tick all of the boxes of what is apparently necessary in movies these days.

But onto the actual plot of the movie. It started off rather slow and repetitive, replaying almost everything in its entirety, but eventually the film sped up, skipping the things that we've seen a million times before. It effectively shows you the successful attempts, after showing a bunch of bloopers where they die hilariously. When I say hilariously, I do mean it. I laughed out loud many times and the comedic aspect really helped this movie carry on.

Emily Blunt was a rather clinical actress, and it played well with her military role. The whole love story was kinda unnecessary, but again it would tip off to how many times they had died, as he gained a little information each time he replayed.

There were a few glaring inconsistencies, and the ending didn't really make any sense. But it was enjoyable. Definitely the best thing Tom Cruise has released in a looong time.

Groundhog Day meets Starship Troopers. For a Tom Cruise movie it is not bad. He is not as arrogant in this movie and actually needs to act, which at times he does quite convincingly as a scared man put into a dangerous situation. But by the end of the movie his arrogance is out and he is the typical Tom Cruise who thinks he's god's gift to I don't know what.

After the aliens attack Bill Cage becomes a public spoke person, encouraging people to take up the fight, putting the right spin on the war. When he is ordered to attend the final battle and publicly discuss it live on air he refuses and instead is made to take part in that fate full day. Killing an 'Evil Lord' he then gets to relieve everyday over and over and over again, correcting wrongs and finally (you guessed it) saves the day.

Typical Tom Cruise action movie. Lots of fighting, running and action - but its not as boring as some of his movies and has some excitement in different areas. The special effects are not bad and you only start noticing your watch near the end of the movie. There were some fun times, especially when his newly appointed Sergeant Bill Paxton tries to say something and Tom Cruise says it for him, so he spends a lot of the movie utterly confused. Casting was ok and the plot was simple enough. I find Emily Blunt quite a hard woman but in this role it works until it doesn't. They tried to add a love story to it but was not that convincing. Still a good fun movie. I did enjoy watching Emily shoot Tom over and over and over again, or when he was getting killed - if only........