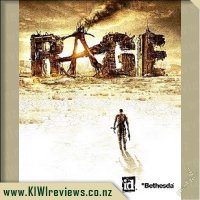 After an asteroid impacts Earth, humanity attempts to rebuild. Sheltered in cryogenic lifeboats, survivors emerge years after impact to a devastated planet where some of mankind survived in struggling settlements or murderous bandit clans, while horrific mutants roam the dead cities. And a mysterious tyrannical government is on the hunt... for you.

This game certainly looked appealing to me. Looking at nothing but the cover art, it certainly piqued my interest. I soon found it to be incredibly similar to Borderlands; a post-apocalyptic scenario, with towns and cities recreated with scrap and remaining pieces. The two main difference between RAGE and Borderlands, is that this game is not so difficult, and that RAGE is a lot slower.

In my opinion, the difference in difficulty made this game far more enjoyable to play, but the plot line was not very well conveyed. In general, I had no idea why I was following the storyline. I would be rebelling against a governmental agency because the first stranger that I met told me to. There was no real backstory.

Graphically, this game was beautifully made with seamless movement, and amazing cinematics. The levels of the storyline certainly were engaging, but in general once the arena was completed, there were no longer enemies to encounter, so you were rather limited. The racing was an interesting addition to the usual first person shooter with an exciting way to upgrade your weapons and cars.

The controls were easy to pick up, and provide you the chance to switch to any weapon at any moment. I enjoyed the idea of being able to craft items to help you unlock doors, but most of them were unnecessary, and were never used.

Overall, an enjoyable game, but far too slow for my liking. The ability to pick weapons, and wander around the world unmolested did make life easier, but I really had little incentive to rush on with missions, and I wasn't really engaged with the storyline.

The Master Chief returns to battle an ancient evil bent on vengeance and annihilation. Shipwrecked on a mysterious world, faced with new enemies and deadly technology, the universe will never be the same. Enlist aboard the UNSC Infinity to experience Halo's original multiplayer and Spartan ... more...