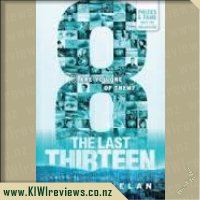 Solaris stands facing us, his arm raised, his flame weapon pointed and ready.

Sam's nightmares become more unpredictable, and even more dangerous, as he seeks the next Dreamer. His search takes him to Cuba, where unknown pursuers, long-forgotten treasure and the perils of the ocean await.

Meanwhile, Eva and Lora's safety hangs in the balance, and Alex makes a terrifying discovery of his own.

Enemies are closing in on all sides.

Can Sam and his friends stay one step ahead and find the next Gear in time?

Sam must find the last 13. They alone can save us.

I have to say, with most series I can tell if they are getting a bit repetitive and boring by the time it reaches the same stage that The Last 13 has now reached, and I have to say that this series is far more promising than others I have read. I thought that this book had a rather interesting twist, taking the reader to the sandy beaches of Cuba and hunting for the next gear somewhere out in the ocean, I thought that this mental picture was quite pleasant.

The cast of characters in this book was great, the next in the line of 13 dreamers was quite an interesting character, a type I haven't seen in the series before, and as always, the hunt to find the next piece of the Bakhu machine was as action-packed as ever! It was fun to see that old enemies were coming back out of the dark, and that the character, Alex, might just be one of the dreamers! In the story, some of the character attempt to try and find another gear while Sam tries to find the one in Cuba, and I actually hoped that the story would have two findings in it, as it would make room for the last book in the series to have no gears found, but instead it would focus more on the conclusion.

I have noticed that the cliffhangers of each book are getting more and more intense, and it was great to see that the ways they are resolved are becoming more and more inventive as well, plus, after they ARE resolved, I can't help but think "Wow, how could I not see this?"! The book is sold at a moderate price, I think that it reflects the book's value while maintaining profit for the sellers, so the people get a good book, the stores get money, everyone is happy! I think that this is a good book for people to read, it is suitable for readers 11+, mainly for the more advanced story structure, anyone younger might find their heads spinning! To sum up, I found the story well-written, highly enjoyable, and it is great for a multitude of readers! Enjoy.

I am no less hooked on this series after this the 6th instalment I'm still eager to read the rest of the series to find out how it ends, it seems so close yet so far away. With only 6 of the 13 gears found and some of these being lost to Solaris it is exciting seeing the collection grow but nerve racking thinking of how they will retrieve the remaining gears from Solaris.

I was pretty surprised with this instalment as always it was action packed but this one seemed to really step up a notch with the dreamers dreams intensifying and more and more dreamers coming forward than ever before in one book. It seems that some of the loved original characters may be more important than they had thought in previous books which is quite exciting for me as I always wanted Ava and Alex to be more among the action as they are such likeable characters.

The plot also deepens as we see more characters come forward as traitors and allies. Mac captures Ava and Lora but it seems likely that he may end up on the right side of the race that remains to be seen. There is also hints of traitor ism from inside the academy but that was only glimpsed in one of Sam's nightmares so don't know if that will go any further but totally interesting if it did with the mention maybe the Professor is involved with Solaris certainly makes me want to read the next instalment and hope this is not so.

Again we travel to far stretches of the globe in search of the next dreamer and the next gear this is a real exciting adventure with sharks and coral reefs, sunken ships and hidden treasure which kept me turning the pages. Along side the quest for the gear are other members of both the enterprise and the academy searching out Stella to find out what she is planning next which turns out to be quite an adventure in itself so this book was certainly not short of any action.

As Alex learns there is some dark secrets in the history of the last thirteen and the lengths that had been gone to to create the ultimate dreamers with a trip back to the original research laboratory. I found this quite bizarre but I guess it does make sense that experiments had to have been made and mistakes encountered in the process. Will be interesting to see if any new developments can be found from the original research in the next book as this was left unanswered. This book certainly left me with lots of niggling questions!

I am looking forward to book 7 to find out more of Alex and Ava's talents and to see who the next dreamers may be. The race is certainly stepping up a notch and I am getting more and more faith in the young dreamers as a team and have all hope that they collect the gears and defeat solaris. We are still learning more and more about the race and how it started along the way but there is so much more yet to be explained, so I eagerly await the next chapter.

We're going on a croc hunt.
We're going to find a big one.
I'm not afraid.
We're as brave, as brave can be!
Join the gang in the croc hunt game! But beware, the brave animals just might find a real croc - what will they do then?!