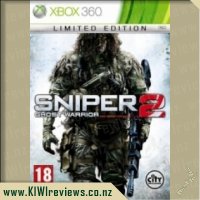 Features:
•  Sniper: Ghost Warrior 2 takes all the breathless anticipation, precise controls and skillful fun of sniping and mixes it with stealth and silent elimination play, action scenes, a co-operative move playbook
•  Night vision and thermo vision goggles to use in limited visibility situations
•  Vehicle sections are a new addition to the Sniper series
•  Multiple and varied locations including urban, jungle, mountain and tundra environments
•  Realistic ballistics take into account the player's location, wind speed and direction, breathing rate and distance from the target
•  Snipers do not fight alone in the real world and nor do they in Sniper 2. Working with your spotter is key
•  All environments are based on real-world locations
•  An array of faithfully recreated weapons are at your disposal, including six sniper rifles, three assault rifles, heavy machine guns, and more
•  Silent kills allow for quiet enemy elimination and successful execution sees the player rewarded with a brutal kill animation
•  Bullet cam shows particularly successful hits
•  Limb dismemberment from large calibre guns and explosions
•  Sniper: Ghost Warrior 2 is built on CryEngine3, the most advanced multi-platform development tool for current-generation consoles and for PC
•  New equipment for stealth gameplay
•  Multiplayer modes designed especially for sniper duels.
•  Epic story crafted by acclaimed writers

Precision, stealth, and timing are essential traits in a sniper, one mistake can mean life or death, failure or succession, you just can't miss your mark first time round, and this game does by not creating a very engaging game.

In Ghost Warrior 2, you take on the role of mercenary sniper who is working with the CIA to stop a biological weapons dealer. There's twists and turns, flashbacks and a really contrived plot line that really doesn't connect you to your character at all. The campaign is a good excuse to shoot the bad guys in the head for a while but there's over acting and really, really awful dialogue and so simply shooting, the game isn't that well written. Things tend to appear blurry once up close and on top of that, enemies and characters look bland and have robotic animations, so they just don't look real enough.

There's no real stealth needed to this game, as the path is so set out for you and so linear that there is no real option there for you to figure out your own spot of advantage or to work out how to get to where you want to without being spotted, and so this takes a lot of fun out of the game. The only good thing about this game is the effects your surroundings have upon your aim and shot, such as wind, angle, speed, your posture etc. but, that is the only good thing about the game. The multi player mode is incredibly disappointing with bare minimum of features, the hide-and-seek game is initially fun, but once you score a few kills on each of the maps, you've seen all that there is to see.

This game had great potential but just falls so so flat.

Built upon the foundation established by Souls series creator and Dark Souls II Supervisor, Hidetaka Miyazaki, with development helmed by FromSoftware Director Tomohiro Shibuya, Dark Souls II will feature a new hero, a new storyline, and an unfamiliar world for players to survive in, while delivering the uncompromising challenge and ultimate sense ... more...