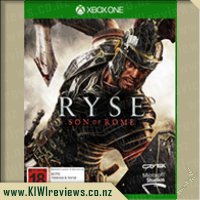 Amidst the chaos of the late Roman Empire, become soldier Marius Titus and embark on a perilous campaign to avenge the death of your family. Through the immersive realism made possible by Xbox One, you'll experience brutal skirmishes and massive battles as you fight to restore honor to Rome at any cost.

Cinematic immersion in the Roman Empire
Ryse: Son of Rome presents a cinematic recreation of the Roman Empire in breathtaking detail, from the northern reaches of Britannia, to the coliseum and the very heart of Rome.

Brutally realistic combat
The brutality and intensity of Roman warfare are brought to life in visceral detail, thrusting the player into the chaos of close-quarters combat, where you can see and feel the emotion on your opponent's face.

Embark on a journey of revenge, betrayal and divine intervention
Ryse: Son of Rome tells the story of a young Roman soldier, who witnesses the murder of his family at the hands of barbarian bandits, then travels with the Roman army to Britannia to see revenge. Quickly rising through the ranks, he leads the Roman army against the barbarian horde, then discovers that he must return to Rome to find his vengeance.

Gladiatorial glory
Rome is synonymous with the Coliseum and its epic gladiatorial battles, and in online MultiPlayer Ryse will plunge you into this brutal world**. Take on the guise of a gladiator and enter the Coliseum to fight side-by-side against an everchanging array of enemies, in dynamic environments, to the roar of thousands of spectators.

Full Xbox SmartGlass integration
With the ability to deep link directly into the campaign and launch from Xbox SmartGlass, players can jump directly into the experience. Game DVR lets you review and share the best experiences from your game directly from your tablet. A context-sensitive achievement and help guide will help you unlock secrets along the way, with tips that are synched to your location and situation***.

Command and fight with Kinect
When in formations, optional voice commands allow you to direct attacks and encourage your troops, while motivational cries can turn the tide of a mass battle by rallying troops or focusing attacks.

Ryse: son of Rome is based during the rule of the Roman Empire following Marius Titus, a man bent on revenge for the death of his mother and sister. As a side note this was the 1st Xbox One game that I got with my console.

The game play is a 3rd person action game, fighting with your sword and shield is as much fan as you would imagine! Each button (A, B, X, Y) has different moves such as block, counter attack etc. and it works so flawlessly. Many other reviewers give it a bad reputation of which I can see where they are coming from but it is giving it a really bad wrap unfortunately.

As for the Graphics they are just amazing. Facial Animation looks near perfect, the cut scenes are just like the game play. if this is one of the first games for the next gen I can only imagine what games in 2, or 3 years will look

Overall I would highly recommend this as a introduction to the Xbox One, it will keep you entertained for many hours and if you are like me and love to get 100% on games their games, you will be playing more than once!

The Simpsons Game features a hilarious, sprawling, and mind-busting storyline crafted by the TV show's Emmy Award-winning writers. For this action-comedy, the full cast of voice actors from the TV show and movie reprise their roles to lend the ultimate in authenticity and realism to the game.