ProdID: 5445 - The Adventures of Kory - Flight of the Kiwi
Written by Paul Martin 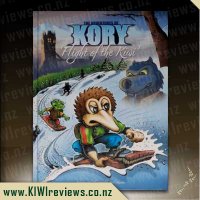 The Adventures of Kory - Flight of the Kiwi product reviews

In the North Island of New Zealand, there is a place called Whale Bay, where surfers ride the waves that roll in. It is here, a little brown kiwi calls home. Kory and his friend, Bert the green gecko, enjoy surfing and fishing. Adventure tracks these two characters and Kory often needs to use his 'Kiwi ingenuity' to get out of tricky situations he and Bert find themselves in.

When a ruthless French hunter captures Kory's family and takes them to his lair in Europe, it's a race against time, as Kory and Bert set off to trek their way through the French mountains on a rescue mission they'll never forget.

I love books that are written by New Zealanders using New Zealand characters so was keen to review this book. I was really unsure what to expect and for what age it was for. On receiving this book I was excited to see that it was a comic. I am a primary trained teacher and it is always great to find comic books that might hook in the reluctant readers.

I flicked through the pages with my son only looking at the illustrations (I only read books to him once I have read them myself and agree with the storyline). I was impressed at the way the illustrations capture his attention and we could talk about what we thought was happening. Some of the illustrations did however make me wonder for what age group this was targeted at. I went over to the webpage only to find they say it is suited to all ages - this is definitely not something I would agree with (and I hadn't even read the storyline).

On sitting down to read this comic to myself I found myself having to re-read parts to work out what was happening. I found that it jumped from one place to another very quickly in a very confusing way. Therefore I believe that this book needs a maturity and reading age of 12+.

I think that the author has definitely found a genre that is missing in the market (NZ Comic) but believe that it would be better if this could be something that can be related to a bit more easily.

When I requested this book I had no idea it was a comic book, I thought it would be an interesting 'read' about travel and Europe and teach the girls about the world. Although it was fun I would of preferred a more in-depth story.

I loved the kiwi lingo and little tad bits about our beautiful country. It was amusing while discussing the rare bird in New Zealand, the Kiwi (which the local Maori call the kiwi feathers 'Taonga' "A Treasure" ) that you need to be on your toes as it is rumoured that they posses a mystical gift known as Kiwi Ingenuity. Loved that. Then later on in the book they just so happened to use that kiwi ingenuity in such an awesome way.

The pictures were really great and gave a lot of the story in them. I felt it moved very quickly in some areas, it was a very fast paced book. It did not hold my girls attention like I was hoping it would. Have read twice now and both times they were over it before I had gotten close to the end. Maybe its an age thing.

On a personal note I did not like how they would involve a new character and then that character just disappeared. Who lets teenage boys attempt a rescue from a bad dude all alone. I was surprised that the adults just stepped aside and said do what you gotta do - but that's more the mum in me and probably reading more into it than I should.

I think the premise is there and could be something awesome, I just don't feel it was reached in its current form, unfortunately. A good read but don't think we will be in a hurry to pick it up and read again for a while.

Being a dabbler in the visual design world myself, and having chatted with the author and found that he is, by trade, a graphic designer more than a story writer, I was very curious about this title. Knowing that it would be best to hand this on to other reviewers, to get a wider perspective, and also knowing this book wouldn't appear to my youngest and was too 'young' for my eldest, I was quick to flick through it and prepare it for handing off to a new home.

The artwork is amazing. This chap certainly deserves the title of "Illustrator and Designer". There is texture and depth to the artwork on par with many "professionally published" titles I have seen out there. But the story... oh dear. Sorry to say, but that left me cold. I was shocked to see a storyline that promoted young kids being allowed to fend for themselves in harsh conditions and facing down dangerous villians with weapons in foreign lands.

Yes, there was a lot of "showcasing the Kiwi #8-wire ingenuity" in there - turning an old wooden door and some rope into snowboards and a sled to escape on being the highlight of that - but despite my love of all things MacGyver'ish, this was too James Bond for such a young target audience.

Overall, if it had a better, less fractured story I think it could be polished into something pretty stunning, but self-publishing is risky for those not storytellers by nature. Spending extra time and/or money on putting this through a more structured and rigorous testing-panel regime may have saved it from being a bit of a near-miss.

An epidemic of apocalyptic proportions has swept the globe, causing the dead to rise and feed on the living. In a matter of months, society has crumbled: There is no government, no grocery stores, no mail delivery, no cable TV. Rick Grimes finds himself one of the few survivors in this terrifying future. A couple months ago he was a small town cop who had never fired a shot and only ever saw one dead body. Separated from his family, he must now ... more...