A Song for the Dying review

ProdID: 5437 - Birthdays for the Dead
Written by Stuart MacBride 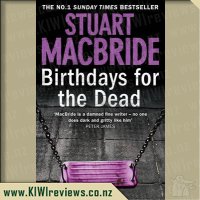 Birthdays for the Dead product reviews

The gritty new standalone crime novel from the No. 1 best-selling author of Shatter the Bones and Dark Blood.

Detective Constable Ash Henderson has a dark secret! Five years ago his daughter, Rebecca, went missing on the eve of her thirteenth birthday. A year later the first card arrived: home-made, with a Polaroid picture stuck to the front -- Rebecca, strapped to a chair, gagged and terrified. Every year another card: each one worse than the last.

The tabloids call him The Birthday Boy. He's been snatching girls for twelve years, always in the run-up to their thirteenth birthday, sending the families his home-made cards showing their daughters being slowly tortured to death. But Ash hasn't told anyone about Rebecca's birthday cards -- they all think she's just run away from home -- because if anyone finds out, he'll be taken off the investigation.

And he's sacrificed too much to give up before his daughter's killer gets what he deserves!

The Pirates Next Door
Rating: 8.3

Looks like another series I have to read. A local officer has been affected by "the birthday boy" but can he be caught?

Ash is a bent cop, he also jumps to conclusions which aren't always right, he is deeply in debt to a loan shark and that is keeping him bent.

The characters are well written with flaws so you read about them warts and all, had to laugh at some of the descriptions. Unlike the series with Logan MacRae there is not a lot of bad language.

One thing I always wonder is why did the person commit the crime, drives me batty when I read a book and it goes into great detail about the crime and the investigation but you never find out why, so it was great that this was answered in the story.

I notice that this a series about Ash Henderson so I am hoping to find more books in the series. There is so much that could happen to Ash and so much that could be explained about his past. The book concentrates on one crime and not a few that are tangled together.

Page turner, had a few late nights (lucky I don't get nightmares). Not recommended for the feint hearted as there are a few very graphic parts to the story including suicide.

A culture of single-celled Archaeons, gathered from the deep sea, begins to rapidly multiply and infect the crew - with agonizing and ... more...