Aladdin 2 - The Return of Jafar review 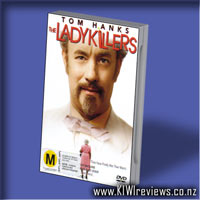 Disclosure StatementFULL DISCLOSURE: A number of units of this product have, at some time, been supplied to KIWIreviews by the company for the purposes of unbiased, independent reviews. No fee was accepted by KIWIreviews or the reviewers themselves - these are genuine, unpaid consumer reviews.
Available:
15th March 2005

A remake of the 1955 comedy, the story revolves around a Southern professor who puts together a group of thieves to rob a casino. They rent a room in an old woman's house, but soon she discovers the plot and they must kill her, a task that is more difficult than it seems.

Far from a laugh-a-minute movie, I found this movie was more a constant chuckle. Hanks' atrocious southern drawl and mo-&-goatee kept giving me a mental image of a young Colonel Sanders (of KFC fame) as he might have been if he had dabbled on the wrong side of the law.

With a plot that seems pretty straight-forward and quite linear, pratfalls that hold a modicum of predicability (HINT: You DO NOT hit ANY explosive with a hammer, even if you ARE sure it's safe to do so!), and a near-constant dribble of puns and bad jokes... this movie really wasn't all it could be. But then, as an American remake of a 1955 British classic, we have the age-old conflict between typically-US slapstick humour, and the traditionally dry British intelllectual wit which relies more on implied humour and a bit of thought.

The plot revolves around Marva Munson (Hall), a rough-n-ready African American woman in her twilight years, devout Christian and all-round stereotypical Granny. Her basement is rented by Professor G.H. Dorr (Hanks), under the pretense of being a bandleader seeking rehersal space. The truth is a lot less heavenly than the music Marva hears coming up from below as she bustles around her house during the day. The 'band' are planning to dig a tunnel from her basement to the safe counting house for a boat-hosted casino moored nearby. (For those not in the know, the laws regarding gambling at that time did not allow for casinos on land. However, there was no law against the casino being afloat. The money was shipped through a tunnel from the permanently-docked boat to an underground counting house onshore.)

Suffice to say, with a motley crew at the helm, and an irrasible old lady who just seems to be in the wrong place at the right time, things go wrong for our band of would-be vaultrobbers. After Marva walks in and finds a basement full of flying money, the gang decide it's time for her to pass on to meet the God she so devoutly worships. However, this really does prove a lot easier said than done.

Overall, the movie wasn't too bad, but the confusion caused by the swapover from a British movie (ironically written by 2 Americans) to a modern American remake just leaves it somewhat flat in places. However, there are plenty of little things popping up in the background for the observant to notice, while the rest of the audience have a laugh at slapstick. For example, keep an eye on the pictures of Marva's dead husband. If you look carefully, you'll see that his facial expressions change as the movie progresses. See if you can spot the others. :)

After stumbling across an alien crash site, four small-town misfits (Burnie Burns, Gavin Free, Michael Jones) must use an extraterrestrial battle suit to save mankind.