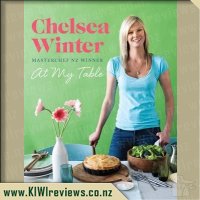 Hearty, delicious, no-fuss mainstream New Zealand recipes from MasterChef New Zealand winner, Chelsea Winter. At My Table is a fantastic selection of Chelsea's all-time favourite dishes. There's a recipe for every occasion, no matter what you've got on your plate. From pies to pizzas, fish to fajitas, burgers, soups, meals for dinner parties, salads, cakes and desserts and of course, Chelsea's signature dish : buffalo wings with blue cheese aioli. Chelsea's tasty, honest food will be a hit with your friends and family.

Author Biography: Chelsea Winter is the winner of MasterChef New Zealand's third season, a former marketing executive, and lover of simply good food. Don't be fooled by the tall blonde exterior; she's grown up on farms, eats cheese sliced straight from the block and has a relaxed, accessible style of cooking. Chelsea loves real food; she cooks simple, homestyle food that's easy to prepare, easy on the wallet and most importantly, tastes fantastic.

Phoebe and the Night Creatures
Rating: 9.6

How to Speak Dolphin
Rating: 9.6

I was lucky enough to win this cookbook at a show Chelsea was presenting at. I was super excited to go home and start making all of these delicious meals I had heard so much about.

I first started off with the famous Chicken Pie, woozer it made a big enough pie that would feed an army, found it super rich so was not a huge fan (i was pregnant at the time). Then made Hollandaise Sauce to go over our bacon and eggs, epic fail, I was thinking, oh no, nothing is working for me. Gave it a few weeks and had another crack at it, ever since then the meals have been amazing. Fish pie would have to be a firm favourite, lots of yummy ingredients. This time my husband tried to have a crack at the Hollandaise Sauce and much to my surprise nailed it. We have used this recipe about a dozen times now and has not failed since.

The book covers a range of food from breakfast, lunch, dinners, pizza, pasta, burgers, dessert and baking. You get lots of value for the price. Some good old kiwi classics jazzed up and then loads of fancy food that you can use for entertaining. Love cooking from kiwi books and this is a goodie.

After watching NZ Masterchef on TV a few years back now I rushed out and purchased Chelsea Winter's cookbook 'at my table' as soon as it came out, she has another book which came out before this one which I haven't purchased. This is a fantastic book which has sold out numerous times online and in store as Chelsea Winter is such a popular household name since her fame began on NZ Masterchef, she often shares her recipes on her Facebook page and also on her website but not all of them. At the time of her book release there were some recipes I knew were in the book but not online that I was itching to try so I got the book as soon as I could.

The first thing I decided to try and bake out of this book was the chocolate brownie, I love chocolate brownies but I have to be honest and say that the ones which I have made in the past are either sticky and gooey in the middle (much more than a brownie should be) or they just don't taste quite right to me. I had heard rave reviews from friends about Chelsea Winter's chocolate brownies and had also read about how amazing they are on her Facebook page, so I really was hoping mine would turn out perfect and live up to all of this hype. The brownies were relatively easy to prepare only taking me about 10 minutes to whip up a batch and have them cooking in the oven. As they cooked the smell that filled my house was divine and chocolaty, tasting them was even better, they were rich and moist and filled with real chocolate, the best brownies I had ever made or tasted.

Since making the chocolate brownies I have managed to successfully cook several other recipes from this book such as the oaty ginger crunch, the crunchy roast potatoes, the dutch apple pie and also her chicken and pie which was really good even though it did make a lot of dishes and require quite a lot of effort to make it was well worth it. There are still some recipes which I am wanting to try in this book one day such as the burgers and pizzas which i'm sure i'll get around to at some stage.

The book is bright and eye-catching and is easy to find what you want, either by looking under the right category or by referring to the alphabetical reference at the back of the book.

Due to my busy workload at night, I never watched Masterchef NZ so I had no idea who she was. So it the books were bought solely on recommendation. And I must say I'm so pleased I did.

At my Table cookbook, which is her first cookbook, has a soft cover with a nice casual photo of Chelsea on the front cover, the rear features some of Chelsea salad dishes. The book is over 200 pages long and is separated into Breakfast, Baking, Lunch and small plates, Burgers, Pizza, Mains, Desserts and Basics. The index is good and set out well with cross referencing. The recipes all have a nice photo for each meal, the ingredients/method, which are all nicely laid out.

So far I have made the Incredibly Tasty Cookies which were very easy to make and had a variant on processing the rolled oats to smooth first, which was a nifty trick to get my girls to get them as they say they don't like oats! But they loved them. I have also made the Creamy chicken vege pie, which is to die for. Oh and the Slow cooked lamb shanks, these are 10 out of 10.

The recipes have ingredients you have heard of and are available at your local supermarket. This really is a great cookbook for all at home cooks.

Wow wow wow! I have recently found some of Chelsea Winters recipes and thought I would give them a whirl. They were all amazing so I decided to take a chance and purchase this book. I am so glad I did as it is jammed pack of amazing recipes.

Chelsea's recipes are simple to make but have a huge list of ingredients for each. Most of which ingredients you will find in normal household cupboards but some that you will need to take a specific trip to the supermarket for. I suggest picking your recipe first then doing a shopping trip, not relying on "yeah I will have all the ingredients in my pantry".

I made the chicken and bacon pie the other night from her book. It sounded simple but needed a lot of pots and pans, things cooked separately etc so it wasn't an easy throw together dish, but my goodness it was amazing! I currently have her double chocolate cupcakes in the oven baking and the aroma wafting through my house is divine.

If you want a nice, bright and eye catching book with some to die for recipes then you need this book. If you like simple recipes with 2-3 ingredients that you can whip together I wouldn't advise you buy it.

I'm currently making an easy pizza sauce recipe from Chelsea Winter's book, and while I wait for it to reduce I thought it would be the perfect time to write a review on the book (oh and the pizza sauce is smelling great by the way!)...

Chelsea Winter rose to fame after Masterchef NZ and despite there having been 2 more seasons of NZ Masterchef since then, she has remained a household name and has an engaging audience via her facebook and web pages and has sold out of her cookbook a number of times. This in itself is probably enough to make you want to go out and buy her book, but I'll review it a little more in depth.

Firstly I have to mention her chocolate brownie recipe - I've made many a chocolate brownie in my time but I'd never found the perfect recipe until now. Chelsea's recipe is simple and easy and not too expensive to make (as some brownies have too much chocolate, butter or eggs - all which add up in price). It wouldn't be a real brownie without actual chocolate, and this one has the perfect amount to add great flavour and gooeyness without too much expense. However I wouldn't go out and buy the book just for this recipe as she recently shared it freely on her facebook page so it's probably not too long before you can search for it out there on the web and find it.

So with so many yummy recipes of hers out there on the web, why buy the book? Honestly if you can't afford it, then it wouldn't bother. But the book is great and does have many exclusive recipes. I've tried a few of her baking recipes - some yummy oaty based ginger crunch and some coconut cookies come to mind - recipes I've not seen elsewhere.

Her dinner recipes use a lot of ingredients - even with my well-stocked pantry, they are not the sort of recipes I can whip up without planning a supermarket shop first. But all ingredients are easily found and if I have time to make a comprehensive recipe, then I can see why she puts everything in it - the flavours are great and it's what makes her recipes unique.

She has a number of recipes from her Dutch heritage. Although I'm yet to try any of them - I'm really keen to have a go at making croquettes and there's a Dutch apple tart that I'm wanting to try soon.

These days you can search for almost any recipe on the web, but it's nice to be prompted with pictures and ideas and I'm all for supporting kiwis who are out there being proactive and living their dream. I highly recommend this book, but I personally think it's more suited to those with at least a moderate amount of cooking experience who want to expand their horizon and make great fresh food from scratch.

You bet! From booming Brachiosaurus to the terrible tooting T. Rex, this amusing handbook not only includes stats on the funniest dinosaur farts but also the sound effects that go with them. Just push the button on the battery-powered fart machine and let 'er rip!