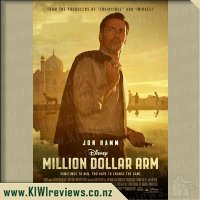 Disclosure StatementFULL DISCLOSURE: A number of units of this product have, at some time, been supplied to KIWIreviews by the company for the purposes of unbiased, independent reviews. No fee was accepted by KIWIreviews or the reviewers themselves - these are genuine, unpaid consumer reviews.
Available:
on DVD from October 2014

In a last ditch effort to save his career as a sports agent, JB Bernstein concocts a scheme to find baseball's next great pitcher. Hoping to find a young cricket pitcher he can turn into a major league baseball star, JB travels to India to produce a reality show competition called "Million Dollar Arm."

He discovers Dinesh and Rinku, two 18 year old boys who have no idea about playing baseball, yet have a knack for throwing a fastball. As the boys learn the finer points of baseball - JB, with the help of his charming friend Brenda (Lake Bell) - learns valuable life lessons about teamwork, commitment and what it means to be a family.

Cricket and baseball are not something that my partner or I are remotely interested in but we sat enthralled as we watched this wonderful "feel good" film about the search for someone with a "Million Dollar Arm". The story revolves around a sports agent called JB Bernstein who is struggling to make his business work but hits upon an idea to set up a competition in India to find great baseball pitchers..

The story takes the viewer across to India with JB in order to find his two prospective pitchers. JB then takes them back to America and we see how the young men adapt to the game and a completely new way of life. Naturally there are a lot of cross-cultural incidents and mishaps which adds a light-hearted touch to the film. There's also a smattering of romance in there so don't expect to be bored with a film just about baseball. There's no need to have any real knowledge of the sport to enjoy this film.

Apart from the terrific cast that worked really well together, what made this film so special was the fact it is based on a true story. Don't miss the credits at the end as they include original photographs of the two boys selected to come to America and their progress over the years. It also provides updates regarding JB and his neighbour, the wannabe coach from India. The pictures and this information wrapped the film up really nicely. Such a refreshing change to see a terrific film without the need for excessive violence, CGI and special effects, just a heart-warming story that the whole family can enjoy!

When I receive movies to review, I will generally try not to read or watch anything about it, to try ensure that I don't have any preconceptions about the film. So I had no idea what the film was about, and I was a bit concerned as to whether I would enjoy it as I am not a sporting fan, and this film very early on labelled itself as a sporting film.

But I watched it all the way through. In all honesty, it was a little bit slow to start off with; the fact that I have no interest in cricket or baseball didn't help matters. But I soldiered through and I started to enjoy it. The characters are well cast, and I quickly started liking certain characters, and getting annoyed when things didn't go smoothly for them. I was easily able to empathise with the characters, and I was surprised to realise that the film was based on a true story.

I enjoyed being able to watch a true story that actually follows the same flow as a general hollywood plot, where things go wrong, but eventually work out for the best. I particularly enjoyed the introduction to Indian culture, and the contrast between India and the United States. It was good to see a significant emphasis being placed on conveying the culture and traditions of India, and it didn't come across as forced.

It's a real testament to the quality of the film, that someone who dislikes sports would enjoy the film. In fact I have already recommended the film to others. I just wish the film was a little longer so that I could see the events that occurred afterwards.

I'll be the first to admit that sports just aren't my thing, but I watched the trailer, showed it to my mum and we both thought it looked like it might be a fun movie.

We start off with the struggling JB who a few years prior had decided to branch out and start his own sports agency. He ends up pitching an idea to the wealthy Mr Chang, to do the Million Dollar Arm, JB would travel to India, hold trials, bring back a couple of them, train them in the ways of baseball and hold scouts try outs. The story revolves around this plan and so JB heads to India. The setting is, of course, very fitting, half shot in India and half in America. The music is wonderfully fitting and I loved the Indian music, fitted perfectly and really got me into the scenes.

Lake Bell, as Brenda, didn't really do anything for me, of all the characters in the movie, I could have easily done without her, but obviously she was needed as the voice of reason, go between for JB to learn how the boys are coping and generally tell JB to pull his head in when he's being too much of a jerk. Alan Arkin was a fun character, even though he spends 90% of his role asleep. The stars of the movie are Dinesh and Rinku, the actors playing them gave them the right amount of vulnerability and fish-out-of-water making two wonderful characters.

There were a few moments where I got a little bored, but that was mostly at the start, before JB travels to India. There are plenty of moments that provide great laughs and some that tug on the heartstrings. This is a good family movie and the best thing is that you don't need any knowledge about baseball to follow along with the story and enjoy it. I really like how at the end there is actual footage of Dinesh, Rinku and JB which also continue through the credits.

A fun movie, that you don't need to be a sports lover to enjoy and one that I will probably watch again. Good fun for the whole family.

When Frank's wife leaves him for Jacques - a seductive, psychopathic drug dealer - Frank is transformed, and quicker than you can utter an appropriate expletive, The Crimson Bolt is born.

With a super, red, hand-made super suit, a wrench, and a crazed sidekick named Boltie, The Crimson Bolt beats his way through the mean streets of crime in the hope of saving his wife Sarah... that is, if she WANTS to be saved.