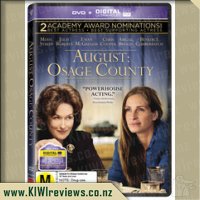 Academy Award Winners Meryl Streep and Julia Roberts star in the darkly hilarious and deeply touching story of the strong-willed women of the Weston family, whose lives converge when a family crisis brings them back to the Midwest house they grew up in, and to the dysfunctional mother who raised them.

Before I watched this movie, I was anticipating something that was rather funny because of the description provided on the internet. I sat down with my husband to watch it and became very much engrossed in it. I did find it extremely touching and at times, rather sad too.

There were some very topical subjects embedded in the movie. Death, suicide, divorce, addictions, family relationships, cancer and affairs to name some of the key ones. The suicide of a character that I expected to hold an important role in the movie was a bit of a surprise to me. I guess his absence from the goings on did actually make him a central character to the movie. The acceptance of the weird and antisocial things that each spouse does, in this case drugs and alcohol, goes to show the dysfunctional relationship that Violet and her husband shared. Watching the movie made me think that we could be watching any family (perhaps a damaged one) with tensions after the death of a family member and with family secrets which have been hidden start digging at each other. At this stage we see many of the disagreements and secrets begin to unfold.

Meryl Streep and Julia Roberts did a fantastic job at pulling off their characters and the strained relationship between the two of them. Streep's character, Violet Weston is rather wild, dying of cancer and is constantly in a drug induced state. Robert's character reacts to that with some anger and also with serious strength and a desire to stop the behaviour.

Pretty much the only people we see in the movie are the family of Violet Weston and people who have a direct link to them. There isn't room any in there for crowd scenes or random extras - it is all very much up close and personal with the Westons. Each and every one of the actors do a sterling job of making us believe that they are part of this dysfunctional family. There are plenty of arguments and disagreements between them.

I enjoyed the repetition of the song 'Lay Down Sally' by Eric Clapton throughout the movie. I love the music and I reacted in a positive way each time I heard it.

With a relatively small cast, this movie kept my interest throughout and I think the only thing that I struggled with was to call it any form of comedy.

Given the list of actors in this movie I thought that this would be a good movie to give a go, plus being touted as a black-comedy dramatic family reunion it piked my interest even more.

The story starts off with the patriarch of the family interviewing a woman, who he then hires, for the position of a live in maid, as his wife is dying from cancer. Just ten minutes into the movie though, we find out that he has vanished, walked off without a word, and so we see the family reuniting to help their mother during the search for their father and the repercussions that follow. Each character is unique, there are no double-ups here, and at the same time they are very believable characters, you could see them all being real people.

The characters have all gone through a lot and the family dynamics are very interesting, from the three sisters who all turned out very differently (one is very brazen and takes charge, one is very shy and quite, hiding her feelings and the last is always looking for love) to the aunt and uncle where she belittles her son in front of everyone to her husband who is sick and tired of her doing so. It wasn't that easy to get used to, these are not the happiest of characters. Whilst this is said to be a black-comedy movie, but there weren't too many funny moments, especially when you add in drug addiction, swearing, divorce, interest in a minor and more.

My first thoughts on this, when finished, was that I wouldn't watch it again, but a couple of days later and I'm thinking that I will give it at least one more watch.

This is the wedding of the summer as celebrated actress Eve Wilder prepares to marry the renowned English writer Harold Alcott in the presence of both of their families, including their grown kids and a rock-star mum and Eve's ex-husband, fellow actor, Laurence Darling.Over the wedding weekend, deep in the Hamptons, both families get to know each other, leading to surprising results that spans each generation. Aided by some special ... more...