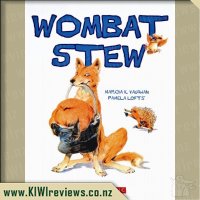 One day, on the banks of a billabong, a very clever dingo caught a wombat ... and decided to make...
Wombat stew,
Wombat stew,
Gooey, brewy,
Yummy, chewy,
Wombat stew!

In this classic Australian picture book, a dingo catches a wombat and wants to cook him in a stew. But all the other bush animals have a plan to save their friend.

They trick the dingo into using mud, feathers, flies, bugs and gumnuts in his wombat stew, and the result is - a stew the dingo will never forget!

Wombat Stew is a classic Australian picture book that tells the story of a dingo who catches a wombat. He decides he wants to cook this wombat up in a stew and begins to prep his cooking pot for wombat stew. The other animals (that are very much Australian) enquire about what dingo is up to. He replies to all of them saying he is going to make a gooey wombat stew. The other animals were wanting to save wombat from going in the stew and suggest different things to dingo that would make a perfect stew. He thinks each is a good idea and goes to collect it to add to his pot.

With each ingredient added dingo sings the chant "wombat stew, wombat stew. Gooey, brewy, yummy, chewy, wombat stew!" Repetitive rhymes are always enjoyed by children and after the first couple of times of hearing this they soon join in and are saying the rhyme with you. All of the animals continue to offer different ingredients for the stew until dingo goes to add the wombat. "Stop!" they all shout and suggest that dingo tries the stew first. He does so and realises that all the animals have tricked him and that the stew tastes terrible. He then runs away and wombat is safe!

As much as I love books that are based around New Zealand, it is good to change it up a bit! This story is enjoyable as Australia is one of those countries our children are more likely to visit. Reading through it we get to meet a number of Australian animals and it is a great way to introduce all of these animals to the children.

This book is a great one to make interactive too. I haven't done it personally, but have watched one of the other teachers in my centre read it in the sandpit while getting the children to make their very own wombat stew! Of course we didn't have a wombat to add, so luckily for us he never does get added but the children enjoy adding in one ingredient as a time and chanting the rhyme to help cook the stew!

I highly recommend this book to others and is definitely one I want to purchase to have in my own teaching kit.

I've heard this book a few times, but recently have had the opportunity to obtain my own copy and review it, so my 5 year old has had a chance to enjoy it too. I can't say for sure that she hasn't heard it somewhere along the way at preschool as it really is a bit of a classic, but she seemed to think it was new to her.

The story is about a very clever dingo who catches a wombat and goes to make it into wombat stew, but all the other animals trick him until such point that the little wombat is saved and the dingo gets to run away and be safe too... It was so long since I read it, I was expecting the dingo to fall in the pot instead, but it's nice to know the other animals were able to trick him and save the wombat without anyone else getting hurt in the process!

The first thing I noticed about the book is that it really is very Australian. This meant that some of the animals were new to my daughter, but it was a great teaching opportunity about our neighbours across the ditch.

The book I got is designed as a first-reader so is smaller in size. After only reading it to her once, my daughter was keen to read it herself. It's full of tricky words and the little ditty in the song changes each time so it's going to take her a while to fully grasp it, but it's a great little challenge for her.

The song in the book even has a musical score at the end to ensure you are singing it right, but I haven't taken much notice of this yet. I just chant the song, and it seems to flow OK.

The pictures are great - not too cartoonish, but fun for kids, and with some great humour in them. This is a book than can be read over and over and over again and I don't think even I would get bored. I can see kids from 2 or 3 years of age enjoying this book, and certainly think my 5 year old will enjoy it for a few more years yet. This is one book worth splashing out for, because it really does have that re-readability factor.

We have had this book for a couple of weeks and I had thought it would be perfect for my Miss Six to encourage her reading over the Easter Break. It has actually been a fantastic book for all my girls. I had never heard of this book though it is apparently an Australian classic. I can see why as it has become a very loved book in our house. The physical size of the book is small - as a early reader usually is - and this has made it a good one to have in the car and in my bag when we are out.

My girls (aged three, six and seven years) have all really enjoyed reading this very charming story about how the wombats friends (all native Australian animals) conspire to save the wombat from being the final ingredient in his wombat stew. The story is told with very colorful and delightfully funny illustrations to go along with a very witty tale. At the end the musical score for the song "Wombat Stew" is included so if you don't know the tune (I didn't) you have something to guide you.

This book has become a very loved one in our house and my girls will read it to themselves, read it to each other or plead for me to read it one more time. They will often randomly just break out into chanting "Wombat Stew" as they dance around the house. Very amusing! I can definitely recommend this book not only as an early reader but as a great book for preschoolers. I can definitely see why it has become an Australian classic. As this isn't a New Zealand book it has been a great opportunity for us to learn about animals in Australia so it is a good teaching book also.

My family and I were invited to Lisbon, Portugal, to retrace the journey of the great explorer Vasco da Gama. He was the first European to reach India by sea and was apparently an ancestor of the Stiltons! But once we got on the boat, I learned that someone was trying to sabotage the voyage. Could I figure out who.