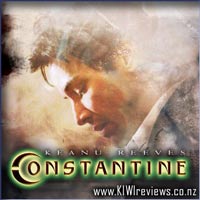 John Constantine has been to hell and back.

Born with a gift he didn't want, the ability to clearly recognize the half-breed angels and demons that walk the earth in human skin, Constantine was driven to take his own life to escape the tormenting clarity of his vision. But he failed. Resuscitated against his will, he found himself cast back into the land of the living. Now, marked as an attempted suicide with a temporary lease on life, he patrols the earthly border between heaven and hell, hoping in vain to earn his way to salvation by sending the devil's foot soldiers back to the depths.

But Constantine is no saint. Disillusioned by the world around him and at odds with the one beyond, he's a hard-drinking, hard-living bitter hero who scorns the very idea of heroism. Constantine will fight to save your soul but he doesn't want your admiration or your thanks - and certainly not your sympathy.

All he wants is a reprieve.

When a desperate but sceptical police detective, Angela Dodson, enlists his help in solving the mysterious death of her beloved twin sister their investigation takes them through the world of demons and angels that exists just beneath the landscape of contemporary Los Angeles. Caught in a catastrophic series of otherworldly events, the two become inextricably involved and seek to find their own peace at whatever cost. I know nothing of the comic series beyond seeing that there was one, so I cannot review this cinematic based on how well it portrays the universe that exists in the graphic novels. I can only judge this film on its entertainment value as a movie, with no background knowledge on the film whatsoever. This film stars Keanu Reeves, and the personality of his character is very similar to that of his previous roles in the Matrix trilogy; very much someone thrust into a position that they do not want to be in, where he is the only one capable of separating two worlds.

While I have heard many grumbles surrounding this film, I can't help but think that it is amazing. While I didn't know the back story, the film reeked of it; you could just tell that every character had a rich background, and a history. I admit there were certainly parts to the film that were very much coincidence after coincidence, I loved the methodologies, the stories, the histories, and the spirituality that this paranormal sci-fi movie had to provide.

It was action packed, it was filled with emotion, and it is now a permanent part of my DVD collection (in the section "I want to watch it again soon")

As soon as I heard that this movie was based on a comic book, I was not interested in seeing it. My husband drags me to every comic book interpretation. And for the most part they all follow a similar style. Though, I must admit that Constantine was slightly different. I didn't feel like they were just using the comic book to storyboard the entire script.

The other thing that made me concerned about going along to this, was Keanu Reeves. Straight out of the Matrix triology, I was kind of sick of him. He is one of those actors who rarely stagger me with his talent. And due to his time as Neo, he tends to get the tormented chosen one roles all the time now.

All that said, I did enjoy the movie and the storyline. The effects were pretty good. I liked the supernatural themes, and the time the film spent in the other realm as well. Reeves was who he is. He didn't stagger me, he was just Neo with a new name.

The golden thing about this movie is Tilda Swinton. She is there so fleetingly. But she has to be my most favourite, versatile actress. She stole the scene she was in and I would watch this again just for her.

Overall, it was nothing to write home about. But I certainly didnt feel like I had been robbed of my precious time either.

I have watched many movies based on comic books in the past and have regularly been disappointed (Hellboy, Spiderman 2) so it was with a measure of wariness that I entered the theatre to watch this latest attempt.

Unlike the previous reviewer, I had no idea that there was a comic book. Now that I do know, I can kinda understand some of the characters and fantastic abilities.

Overall, pretty darn impressed. I'll certainly be looking for this one when it reaches the shelves.

Once again, a movie based on a comic series. As always, it can be very difficult to give characters the same depth and the viewers the same insights in a move as the book contains. It's simply because in a book/comic, a good author can give you insights into the character's mental state by giving you thoughts, narrative, etc. Movie's don't bring it off the same. So, it was with some slight hint of pre-emptive "Oh Grud, here we go..." that I settled back and pressed the 'play' button.

The movie itself actually, shockingly, followed the plot of the comics pretty well, which really impressed me. (Yes, I used to read the 'Hellblazer' comics the movie is based on.) However, they changed key elements of the plot to Americanise it somewhat. This caused some major friction between Hellblazer creator Alan Moore and film-makers Warner Brothers. For a start, Constantine started out as a blonde Brit, and has suddenly morphed into a dark-haired Yank.

Moore, creator of The League of Extraordinary Gentlemen (aka LXG), has been rumoured to have turned his back on this movie entirely, demanding that his name be removed from the credits, and that royalties due to him be diverted and split between the artists, Rick Veitch and Stephen Bissette. Now that is dedication to one's ideals. To underline that, on the topic of LXG, Moore was quoted as saying "The film has got nothing to do with my work, it has a coincidental title to a book I've done and they've given me a huge wedge of money. No problem with that."

Overall, I found 'Constantine' to be quite a good one, even with Keanu Reeves playing, well, Keanu Reeves. (Is this guy TRYING to over-ride every character, or what?!) The special effects were stunning (I especially liked the Hell scenes... Heaven was just corny), the occult rituals and methodologies were stunningly good, and the casting was spot-on. This one will be placed in the hallowed shelves of my collection right away, I think.

From the producer of "Shrek" and "Shrek 2," comes a high-flying computer-animated comedy-adventure tale of a brave-but-undersized pigeon named Valiant, who dreams of joining the elite Royal Homing Pigeon Service (RHPS), and serving crown and country during World War II.

Valiant, an eager young wood pigeon, flies to London to join the Royal Homing Pigeon Service, dreaming of becoming a hero! He is joined by a group of misfit pigeons ... more...