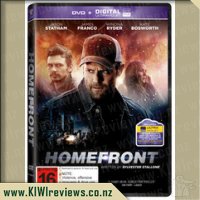 Former drug enforcement agent, Phil Broker is a family man who moves off the grid with his daughter, to a seemingly quiet bayou backwater to escape his troubled past. However, Broker's world soon becomes anything but quiet once he discovers that an underbelly of drugs and violence riddles the small Moretown.

Soon, a sociopathic methamphetamine kingpin, Gator Bodine, puts Broker and his daughter in harm's way forcing Broker back into action in order to save his family and the town.

I can not stand movies where the talking is so quiet you need to turn it up to blarring and then the music or a car driving screams thru the speakers so you need to turn it down. I found this movie so frustrating, as I could not find the perfect volume control for it.

Having Jason Statham in this, I got all excited, I love him and is movies are usually pretty good. When I saw Sylvester Stallone was a writer and James Franco was the bad dude it was an instant mind spinner - images of fighting and action poured through my head. Unfortunately the movie was not as good as my imagination and was a tad boring. Luckily it went for around 90minutes so was not too long.

It started with Jason having hair and being an undercover cop working in the drug community and ended is a small town with him looking better with no hair. Typical revenge movie, where the king pin of the biker gang wants revenge for his sons death. The script could of been better and I thought the way Jason treated the cops was rather low, considering he was a cop.

The end was completely silly. The bad dude knows where he lives and he thinks he is safe, makes absolutely no sense. I really expected better from Sylvester. Prefer watching paint dry.

Jason Statham has again become a character, that is smooth, charming, and always able to win in a fight in pretty much any situation without breaking a sweat. While he plays those characters well, I'd really like to see more growth in the variety of his roles.

As for Homefront, the opening scenes mimicked the first 'Punisher' movie. Drug bust gone wrong, the bad guys irresponsible son gets killed, and the father wants whoever was responsible (and their family) to be killed in response. The only difference is that the person responsible, is Jason Statham. And nobody beats Jason Statham.

A drug society is introduced, as a means of reconnecting the drug cartel with the undercover cop responsible, but fulfils no significant role other than that of a messenger for the villains. Whilst I do appreciate the fact that quite a bit of time is spent exploring the effects of the drugs on families, it acted as nothing more than filler.

Recurring mini-villains was a nice touch, adding a bit more depth to the film, and led to one of the most exciting parts of the film; seeing one of Statham's great plans foiled...even if only temporarily.

The plot was thin, and served more as an alternate ending for the original 'Punisher' movie. Homefront was lacking in believability, but in the end it was still an entertaining film, and thus filled its purpose.

This DVD caught my attention when I saw that it was written by Sylvester Stallone. I was expecting lots of heavy duty action. The cover of the DVD gave credibility to this. During the opening scenes, with the gang entering on motor bikes and moving into a drug bust, I got a sense of the action that might follow. Within these scenes, it became obvious that I had neglected to take note of the "offensive language" part on the rating of the DVD. I am not really into lots of swearing and I think that anyone who is like me, should be aware of this. The language was very much in line with the plot and was to be expected with the characters portrayed in the movie. I guess a gang and a drug bust without swearing would be a bit weak and the characters wouldn't be believable at all.

On the first viewing, I managed to sit through about 30 minutes of the movie and found that it did not have enough storyline to keep me watching. When the plot settled down into "normal" life, rather than the drug bust scenes, I thought that the pace slowed down too much and for too long. I kept waiting for something to happen and it wasn't until closer to the end that the pace sped up a bit to capture my interest. I like movies that I get into straight away and feel like I have some sort of involvement in the movie. Even though the second attempt at this movie pleased me more, I don't think I would have used my time to begin watching it a second time if I hadn't committed to reviewing it.

The innocence of a child and the relationship she has with her father, Broker, stands in contrast to the other characters. They just want to get on with their lives and things keep getting in their way. When Broker's daughter, Maddy, fights back against a playground bully, Teddy, both children witness a power struggle between the two families and the violence that goes with it. Things spiral out of control from there. It is no wonder that Teddy acts the way he does - children see what their parents do and act in a similar way. There is a softer side to Teddy and it can be seen when Maddy reaches out to him to invite him to her party. The smile says it all. I quite like this part of the plot and character development as it is something that we all have to remember - sometimes the one who seems to be the bully in life is the one who needs our help the most.

Drug dependance and drug manufacturing run through the movie. The weakness and desperation of someone on drugs and the power a drug lord has over that person is shown. This exposed an element of society that I have very little knowledge of and it is only really by watching movies like this that I have any experience at all. I can only imagine that the sciences involving a meth lab at accurate; they do appear to be believable.

The movie was only 96 minutes long and I think that this is rather short for an action movie. Perhaps it goes to show that there wasn't enough meat in the plot to be able to drag it out any further. I think that Jason Statham has a lot more to him and I would like to see a bigger, stronger character built for him to play. This was not really the movie for me but it did improve toward the end.

A family of orphaned geese who've lost their way and a 14-year-old girl who leads them home.A heart-warming story inspired by real-life events, Fly Away Home is a feel-good movie for all the family.