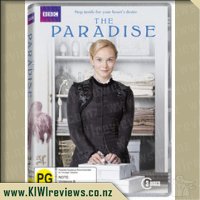 The Paradise is a romantic, sexy, thrilling drama, where the choice between following your heart or your ambition can lead to paradise, or despair.

Set amidst the Victorian splendour of Britain's first department store, The Paradise is a rags-to-riches story of a young girl who falls in love with the intoxicating charms of the modern world. As Denise finds her feet as a lowly shopgirl, she must navigate her way through power struggles, intrigues and affairs.

When the shop's dashing and reckless owner, John Moray, spots her talents she knows she can use this opportunity to rise to great things. Through sexy, episodic stories driven by romance and glamour, this series creates a world as colourful and captivating as the silks on display in the store. This is a love story, a story of ambition and progress, with a mysterious, dark secret at its heart.

The Paradise opens as a young woman wanders around the streets of Newcastle, looking at the shops as she walks. She is dressed in typical Victorian clothing. Well chosen, delicate music adds to her innocence and amazement as her wide eyes enjoy what she sees. Her eyes open wider as she sees The Paradise, Victorian England's first department store. Her eyes look in the window at the finery as if to say, one day she would be part of this. Flute and strings supply the background music as she explores her surroundings. A simple second of eyes meeting in this initial scene sets the scene for what follows as the series unfolds.

I liked the opening scene of the first episode of this series; however, I found it a little hard to become hooked to the storyline initially. I actually watched the first fifteen minutes three times before I felt that I wanted to keep watching. I think that the reason for this is that I have two young children and it is not common for me to be able to sit down and fully watch any programme on TV. The ones that I do watch are often rather fast paced and action filled. However, I am so glad that I took the time to relax into watching The Paradise as, after the initial hurdle, I became fully engrossed in it and didn't want to wait for the next episode. I am glad it was on DVD and I could continue to the next episode without having to wait a whole week. My husband watched the series with me and and had the same reaction as we both have similar entertainment interests. He too became engrossed after the initial false starts. I think I actually became a little addicted to it and watched five episodes in one day. This is unheard of in our house as TV doesn't form a part of our usual daytime agenda. My four year old sat beside me for quite a bit of the time. Even though it is rated PG, the content was generally suitable and he enjoyed looking at the costumes and set. There were only a few "dark" parts that weren't so suitable, so I either moved him onto something else for a while or turned it off until later on. In general, these bits were very much above his head anyway.

Once I became seriously engaged in the series, I enjoyed the slow, careful pace that the storyline moved through. The set and costumes were just beautiful and made me feel as though I was being whisked away to Victorian England. The characters were appropriately mannered for the storyline and the period in which it was set. Their simplicity made them likeable and easy to understand. The Paradise is somewhere that I would have loved to visit and I could imagine walking in there with a perfectly tailored dress and hat to match. The finery was reflected in the jewellery, lace, hats, gloves, perfume etc. The ladies' hair was impeccable.

Denise, the leading lady, becomes the classic rags-to-riches character. She experiences struggles and successes, and her drive to be get what she wants gives hope to the audience to work hard to achieve what they want in life. She also shows us that you don't have to walk over others in order to do so, as she is a quiet, reserved and caring character. Yet she has strength and determination. John Moray, the leading man, is a character who is torn between what is deemed right and the person he loves. He displays fairness as a boss and as a person. He is willing to back up a staff member and find the truth even when it seems obvious what has occurred. The truth comes out in the end and his support of his staff member is warranted. Moray's character is both classy and likeable. Jonas adds a little mystery to the storyline. He is a bit dark but at the same time totally loyal to Moray. He is willing to do anything for Moray, even if it isn't something that Moray has requested. Clara's character is rather mean but, as with life in general, sometimes this sort of person is exactly the one who needs to be helped and loved all the more.

I had not seen any of the actors or actresses on screen before and therefore had no preconceived ideas of who they were or what sort of character they usually played. I think that the cast were chosen very well and were totally believable.

The underlying love story of being with the wrong person for the wrong reasons and having the right person so close but yet so far away will draw in anyone with a soft touch for love. As a viewer of the series, you can feel the pain of love and distance as the characters interact with each other. This love is not limited to the love of a man and a woman; it also includes love of a mother and a child who have been separated.

The issue of department store versus small shops is very important to the story and the characters in the series. Being able to battle against the big giants in business is something that carries on into today's society. The small retailer has to offer a point of difference in order to succeed and that is often hard given the large scale marketing ability and products available in the department store. This would have been a new issue to the shopkeepers of the time since this was the first department store in Victorian England. It was interesting that, just after finishing watching this series, I was listening to the radio and they were discussing the fact that retailers in general (both small and large) were finding it a challenge to succeed with the rise of internet sales in the market. People can now buy just about whatever they want online, whenever they want. The time of the day, geographic area, public holidays etc form no barrier. The actual situation is different now but the general idea is the same and I am sure challenges and changes will happen in the future as well and the same issue will still be topical in many years to come.

The end of the final episode came as a surprise to me but left me feeling heartened that it came to the 'right' end in my eye. Watching this series was a lovely change of pace to my usual chaos in family life and TV viewing! I will certainly be recommending it to friends and family and anyone who will listen to my positive reaction to the series.

Ryder leads a team of rescue pups (Marshall, Rubble, Chase, Rocky, Zuma and Skye) who save their town from everyday emergencies, whether it's finding missing elephants, fixing windmills or another minor mishap involving clumsy Cap'n Turbot.