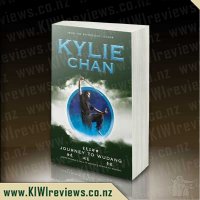 Comprising the collected trilogy of: Earth to Hell, Hell to Heaven and Heaven to Wudang.

In the acclaimed Dark Heavens series, Emma Donohoe learned about martial arts, magic and the true nature of John Chen. It is now eight years since Xuan Wu, God of the Northern Heavens, living in Hong Kong as wealthy businessman John Chen, was exiled from the mortal realm. Emma and Simone, John's daughter, are facing a new series of threats, while their best fighter, Leo, sits in Hell.

They must persuade him to come home... but, in Hell, nothing is as it appears. Human and demon, heaven and hell battle for the fate of the world in this trilogy of bestselling books from Kylie Chan.

The Raven and Other Tales
Rating: 10.0

After reading some of Kylie's other "Emma Donohoe" stories out of order, it was nice to finally "fill in the last holes" with this trilogy. Unfortunately, it took me far longer than anticipated due to other commitments, but every minute I could find to sit and read this was a minute well spent. No surprises, it carries on the story so well, I could easily see this entire series being quickly - and quite profitably (You hear that, Hollywood?) - turned into a long-running TV series. It's easily the sort of thing I would expect to see on a subscription-TV service such as Sky or maybe one of the American networks.

In this series of stories, Emma is trying to adapt to life as an as-yet unidentified supernormal of some kind. Not of the Eastern realms, this is where the idea she may be a descendant of the Western realms starts to come into play. Meanwhile, there's Kitty Kwok, the Demon King, a number of grudge-matches by jealous/envious/angry Eastern Shen... oh, and the whole mortal life to deal with as well.

The long and arduous tasks facing Emma as Reagent and Heavenly General of the Northern Heavens is taking its toll on her, since she is after all still a frail mortal under most circumstances. Yet dire situations, threats from unexpected corners, and some unexpected allies all combine to force Emma to grow her inner self, to become worthy of the respect and authority given to her by John before he retreated into a mostly-mindless state while re recharges his immortal batteries... somewhere.

This story is full of prime examples of the adage "With friends like these, who needs enemies?!", plus a number of other wonderful and timely cliches. But the thing about these stories that really grabs me is huge depth of knowledge and information that goes into them. Not only does reading these stories provide me with many hours of pleasurable entertainment, they also provide me with some stunning insights into the Chinese culture - and by extension the Japanese and other Asian cultures too.

Overall, this entire series so far is a joy to read. My only regret is that even with the huge length of time it has taken me to read this... the time slipped past and I find myself itching for the next book in the series to come out. In this case, it will be the second book in the next Celestial Battle trilogy - Demon Child - as I have already finished with the first book "Dark Serpent".

Fully revised and updated, the record-breaking compendium in a series of 11 fact-packed chapters, we introduce you to the record-holders who've pushed the boundaries of what's possible. The adventurers, the real-life cyborgs, the painters, sculptors, musicians and moviemakers, the stars of social media and the athletic legends, and lots more too.