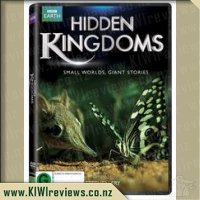 Imagine what it's like to be shrunk down and immersed in a magical world of fantastical creatures living incredible, action-packed lives. With a cast of miniature marvels all less than a foot in size, these superheroes may be small but they pack a punch way above their weight. Chipmunks, elephant shrews, marmosets, scorpion mice, even giant rhinoceros beetles all face drama on a different scale - when you are this small rain drops fall like meteorites and a breeze feels like a tornado!

Filmed against the backdrop of the planet's most iconic landscapes - savannah, desert, jungle, forest, and the cities of Tokyo and Rio de Janeiro - this series, narrated by Steven Fry, explores these worlds from a new and unique perspective. The challenges our mini-heroes face are exceptional and their enemies gigantic... but their solutions are ingenious. Prepare to be amazed, entertained and fascinated by our planet's Hidden Kingdoms. It's time for the little guys to take centre stage!

This DVD was absolutely wonderful. My favourite presenter, Stephen Fry, lends his voice to this fascinating three part series on small creatures. I love Stephen Fry, and watch him in anything I can get my hands on. I also love confusing my husband, so when I put the first episode on he looked at me, perplexed. Eventually he realised it was Fry, but he was listening intently and saying "I know that voice!" for a few minutes.

The episodes are about an hour long each. They spend about 50 minutes on two different animals, telling their story of survival in a world made for bigger creatures. Then they use the last piece of the documentary to give you some insight into how they did it. How they got us a view into that world. I really liked this piece because you got to see all the trouble the crew and camera people have to go to. All the wandering about in the dark with heavy equipment. All the seemingly aimless approach, which leads up to the amazing scenes.

Some of it is so constructed that it's not really "reality" at all. There is definitely some movie magic in there. In some ways, that made me feel a bit better for when they seemed to be in danger, the reality was they were pretty safe. Of course, they live in the wild so they aren't safe but I guess they are mainly seasoned at living in the wild. There are parts of the show where I hid behind a pillow much to my daughter's amusement. I have trouble with intense stories and the little mouse and the elephant shrew had some very hairy calls.

This allowed my daughter and I to have quite a lengthy discussion as well, about the circle of life and how each animal has a food source and is one as well. As sad as it is, we couldn't wipe out a carnivore because the knock on effect on our world might be really awful. Later after we watched the last episode, she sat down and made a nature book all about different animals, what they eat and their mating grounds too. So I think she was very much as engaged as I was in the stories of the animals.

Case Five: Leather & Lace
The Brokenwood Cheetahs are a local rugby team of legendary status. Their losing streak of 50 straight games has broken national records. So when their hapless coach, Arnie Langstone,is found dead - stripped naked and strapped to a goalpost- some think it might be blessing in disguise - perhaps now they might start winning again. But amidst this DSS Mike Shepherd is perplexed by several other ... more...