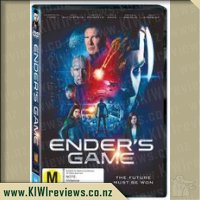 Years after Earth has been ravaged by an alien invasion, Ender Wiggin (Asa Butterfield), a shy, strategically brilliant boy, has been chosen to defend Earth from an ever-present hostile threat. His prodigious skills immediately apparent, Ender is sent to Battle School, joining hundreds of precocious young adults in the pursuit of becoming the ultimate military commander. As Ender excels at Battle School, he attracts the attention of the highly esteemed Colonel Graff (Harrison Ford), who believes Ender to be the military's next great hope.

Under the tutelage and guidance of Colonel Graff and Maori warrior, Mazer Rackham (Ben Kingsley) Ender overcomes the separation from his beloved sister (Abigail Breslin) to rise up the ranks until he faces the ultimate challenge. Ender must lead his fellow soldiers into an epic battle that will determine the future of Earth and the human race. Gavin Hood's vision of Orson Scott Card's acclaimed, science-fiction bestseller is just as thought-provoking as it is mesmerising.

I've read the novella for Ender's Game (which I loved) and the expanded upon novel version of Ender's Game (which I really didn't enjoy at all) and so wasn't really fussed about watching the movie adaptation as I assumed it would follow the latter of the two stories, but nevertheless I have ended up watching it as my husband was rather keen on viewing it.

The world Ender lives in is one where you can only have two children (unless you gain special permission otherwise) and one which had a massive war fifty years ago. Now there are children raised for battle and Ender is one of these children, we follow Ender as he goes from school on Earth, to battle school and to his final training. Watching it was better than I expected as this followed the original novella in its content far more than the book, and so focused more on Ender, his isolation and his growth, there were only a couple of moments from the novel that I could pick out, most noticeably the ending (though I still feel the sucker punch ending of the novella would have suited far more better as the wham bam ending).

The acting was well done, although Ben Kingsley, I'm not sure what nationality he was meant to be as to us he sounded more Australian than anything.

The adults in this movie take on the supporting roles with the kids as the main, which is fitting as we are seeing the effect of it all on the kids, and all of these young actors did a superb job fulfilling their roles in this movie.

While I will still stick to the original novella as my favorite version of Ender's Game, this film slips past into second place, which is pretty good for something I expected not to enjoy one iota.

Ender's Game had an interesting plot. After barely surviving an alien attack, the human race rush to train the smartest kids to command a space fleet to retaliate at the source of the invasion. The fact that the movie focuses on young teens, leads me to believe that this movie is targeted at young teens, so I am intrigued at the ethical and moral questions that the film poses.

A high level of importance is placed on understanding the presence of a grey area between defence and offence; knowing that morality and ethics change depending on survival chances. In a war, certain losses are considered acceptable in the plight to end a war, but how far does that extend? Do you end a war? Or do you ensure that a war never occurs again?

A surprisingly political movie, its spends a lot of time jumping from passive to aggressive, from a small to large scale, and at all times hinting at deception from above. That ultimately led the end of the battle to be predictable. I was pretty happy with the end of the movie, as it provided a "fix" to a situation that was allowed to go too far. Otherwise it would have been a sombre end that could have been likened to the actions of certain WWII dictators.

At the end of it all, I enjoyed the movie. It showed how anyone has the ability to succeed without having to compromise their beliefs. And it highlighted the emotional distresses of holding responsibility in wars.

I went into this movie having no real background. I haven't read the book by Card. I haven't seen any other adaptions. I just saw it advertised and was interested. I sat down to watch this on Saturday night and I was immediately drawn into this story.

Asa Butterfield as Ender comes across as sensitive, quiet but brilliant. He is also able to show some real boiling emotion behind the eyes in some scenes, where you can really feel how disturbed the Battle School scenario is. The addition of actors like Harrison Ford absolutely gives the whole cast a boast and a bit of "sci fi" royalty. But it's the kids that make this film. They are so young, and yet they are soldiers.

The effects in the film were brilliant. I found the design of the sets and the way they had clearly put a lot of thought into the computer sims and how to run those really showed. I was impressed and I am quite annoyed with myself for not going to see this on the big screen. Of course, the story itself doesn't need the big screen to still be viewed and appreciated.

I found the story deeply thought provoking. I found myself thinking about it long after watching the movie. Moments catching me, wondering about how else it could have played out. The main thing that is so disturbing to my mind is the use of children in a war. I found it really jarring, and thought of my own kids being conscripted.

Lastly after watching this my husband said to me that he didn't like Ben Kingsley in the role as a Maori warrior, and found his accent too difficult to believe. I wasn't as phased by it. I think for me, the character's story of his moko was an indication that he himself was not fully Maori but he had wanted to honour that part of his culture. However, I think if you assumed he was meant to be a kiwi then it would have been hard to suspend disbelief.

This DVD includes a making of, which was well worth watching as well as some other special features. I also liked that the cover to the DVD has reversible art. Though I am unlikely to swap it around because I quite like the current art.