ProdID: 5331 - Doctor Who: The Web of Fear
Type of Show: Science Fiction 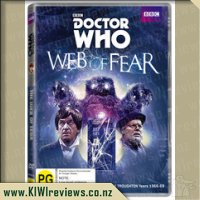 Doctor Who: The Web of Fear product reviews

Nine recordings from the 1960s featuring missing episodes of Doctor Who have been recovered in Nigeria, Africa. Both recovered stories, The Enemy of the World (1967 - released on DVD November 2013) and The Web of Fear (1968), starred Patrick Troughton as the second Doctor.

The Web of Fear is the 1968 six-part story. Episodes 2- 6 were feared lost forever but now these episodes 2, 4, 5, and 6 have been recovered. Unfortunately, episode three is still missing but a restoration team has reconstructed this part of the story using a selection of the 37 images that were available from the episode along with the original audio which has been restored.

Starring Patrick Troughton alongside Frazer Hines and Deborah Watling, The Web of Fear introduces Nicholas Courtney for the first time as Colonel Lethbridge-Stewart, who later returns as Brigadier Lethbridge-Stewart.

Beauty and the Beast
Rating: 6.9

I love me some Doctor Who and so this was a must to request.

Last year, with all of the excitement about the upcoming 50th anniversary, I must say that I was caught up in it all. When I heard that some episodes from 1968 had been found and were going to be available to be watched again I was excited, so getting this on DVD to review was awesome. Only episodes 1, 2, 4, 5 and 6 are full in their content, episode three is constructed from telesnaps (photos from the episode) and the original audio (the whole six episodes have been available to listen to). The total viewing time is two and a half hours, but watching it, it doesn't feel that long.

The eleventh Doctor meets the Great Intelligence during his final season, so it was great to watch "The Web of Fear" so soon after as it gave me some more background to their story together. The Doctor ends up being brought to Earth, not his aim, and he and his companions find themselves in the London Underground dealing with Yeti's and the Great Intelligence. The Yeti's still have their fright factor, it was easy to ignore wardrobe malfunctions and the special effects as this was still an interesting story. Episode 3 was fun to watch, seeing how it was put together and despite being just photos and audio, the photos fitted perfectly.

My six year old, when he saw the DVD case, was straight away asking me if he could watch it. He thought the yeti's were a little scary but lots of fun and he was glad that the Doctor was ok in the end. For my husband he found it very interesting to see how the Great Intelligence ended up floating around in space, so it was a winner for the whole family.

I really enjoyed this and it's a great addition to my collection and a must watch for any Doctor Who fan.

Star Trek The Original Series Season 3 features the adventures of the U.S.S. Enterprise under the command of Capt. James Kirk (Shatner) and his first officer, Lt. Cmdr Spock (Nimoy) during the 23rd century. They are on a mission in outer space to explore new worlds, where the Enterprise encounters Klingons, Romulans, time paradoxes, tribbles and genetic supermen.