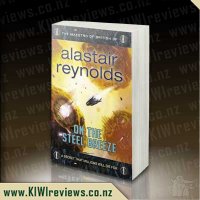 We have found a distant planet. It carries signs of an alien civilisation.

And on a fleet of holoships - vast asteroids hollowed out and turned into miniature inside-out worlds - millions of us are heading there. With engines designed to exploit a physics we barely understand, we are on a one-way journey, travelling at one sixth the speed of light, to a new home. And an encounter with the unknown.

We take with us hopes and lies, secrets and betrayals, and another, quite alien, intelligence.

The Akinya family have not finished with space. Their destiny still lies with the stars, however they get there, whichever of them make it. But the Mechanism has not yet finished with the Akinyas either...

Richard observed the storm of activity swirling around him with an odd sense of detachment. Only the pain seemed real. he remembered hearing it once said that when you died, no matter how many people there were with you, you died alone. That's how he felt now - alone.

After being gravely injured in a battle, Richard awakes to discover Kahlan missing. To his disbelief, no one remembers the woman he is frantically trying to find. Worse, ... more...