Home > Categories > Movies > Comedy > This is the End review

ProdID: 5313 - This is the End
Directed by Evan Goldberg and Seth Rogen 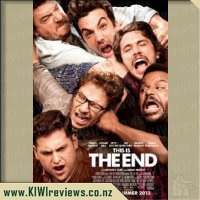 This is the End product reviews

While attending a party at James Franco's house, Seth Rogen, Jay Baruchel and many other celebrities are faced with the apocalypse.

I have always wondered if movie stars really are as friendly as they seem. Every award session, magazine, E Channel always show them going to each others parties and talking to each other if they are best friend. Well this kinda answers that question.......

(lots of name dropping about to occur.....)
James Franco is having a house warming party (nice place) and everyone is there Rihanna, Michael Cera, Jonah Hill, Emma Watson. They are all laughing, singing, having fun when the unexpected happens and everyone's lives are on the line. When Seth Rogen and Jay Baruchel leave the party to go to the corner store blue lights shine and I assumed it was an alien invasion but instead its the Apocalypse. Yes the blue light is all of the good souls on earth being taken away to heaven where as anyone with a question mark is left on earth to prove their worthiness. Since movie stars are basically soulless vessels which sell their services for money, god and the devil are unsure where they really belong.

They are all playing themselves and apparently trying to act natural. At first I have to admit the acting was shocking and extremely awkward to watch considering they are not supposed to be acting. The dialogue between Jay and Seth just didn't flow and seemed so badly scripted that I was ready to turn the tv off. But, eventually they fit into their roles and it improves. As with any Rogen movie there is drug and drink references and there are the cringe factors and the occasional laughs and lots of snickers.

When they first went into the house Franco said his neighbours included Channing Tatum. So I excitedly waited for him to show up. It was a given since his name had been dropped, just didn't expect the character to which he plays. I did expect him to come in shirtless and save the day or when they broke into the neighbours house was sure it was going to be his but alas......

The highlight of the whole movie would be at the end when in heaven they only have to think of an item and it is instantly there and what Jay thinks of is priceless. Have to admit have watched that scene a couple of times because it really is AWESOME. When the credits rolled on, I sat there with a silly grin on my face because of what happens.

(Oh and if you happen to wonder who the guy was holding the flowers and stands on some chicks face it was Paul Rudd, a fight erupted between my husband and I over who it was.)